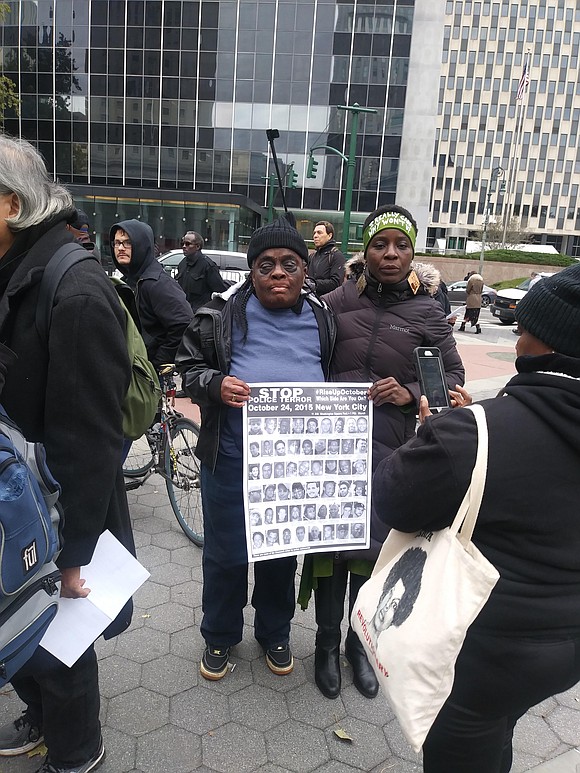 In each subsequent year there was a theme, and this year the theme is “Getting to a World Where Police Murder, Mass Incarceration and the Criminalization of a Generation Is No More!” according to Carl Dix of the RCP.

In Foley Square, it was the old guard and some new faces, such as Anthony Beckford, 37, leader of the Copwatch Patrol Unit and a candidate for New York State Assembly District 45, and Victor Dempsey of Families United for Justice, whose brother, Delrawn Small-Dempsey, was killed in 2016 by an off-duty Black police officer.

A Brooklyn Supreme Court jury decided that the off-duty NYPD officer was “justified” in killing the unarmed man, according to the Brooklyn Daily Eagle.

“If we don’t stand up as a people, we will continually be knocked down,” Dempsey told the AmNews in explaining what he sees as the way forward for the October 22 Coalition movement.

“We have to change as a people,” said Beckford.

Ann Pruden of the NY Free Mumia Coalition, said, “After 23 years, are we strong enough to pressure the cops to stop killing us? No!”

A 17-year-old young man from Staten Island who gave only his first name (Chase), said, “We need to wake up. The youth are seeking the knowledge that allows us to fight back.”

Kahil Khan, 41, said that he believes that after 23 years there has been awareness because of social media, but he added, “not necessarily an increase of action that is needed to minimize police brutality.”

Juanita Young, a legally blind grandmother lost her son Malcolm Ferguson, 23, in June 2000. The feisty grandmother told the AmNews, “‘Oct22’ is my life.”

Newark, N.J. is one of the many cities that observed “Oct22.” Lawrence Hamm chairman of the NJ-based Peoples Organization for Progress said, “I definitely think the social consciousness has changed as it relates to police brutality. There was a segment of the Black community 20 years ago that had to be convinced that police misconduct actually existed.” However, overall the problem has not abated, Hamm acknowledged.

He explained that the “Oct22” protest in Newark centered on the fight to protect the Police Civilian Review Board. “We want a PCRB with investigatory and subpoena power,” Hamm said.

Dix was in Chicago Oct. 22 and agreed to a telephone interview with the AmNews Oct. 23.

“We marched through downtown Chicago, and at one point we stopped in the middle of the street,” he said. “When you look over the past 23 years, we are still fighting the same thing. We have to get rid of the system that needs ‘killer cops.’ It is not just rogue cops killing us, it is the system.”

He concluded, “That is our role as revolutionaries.”