Trinidad under worst flooding in 50 years 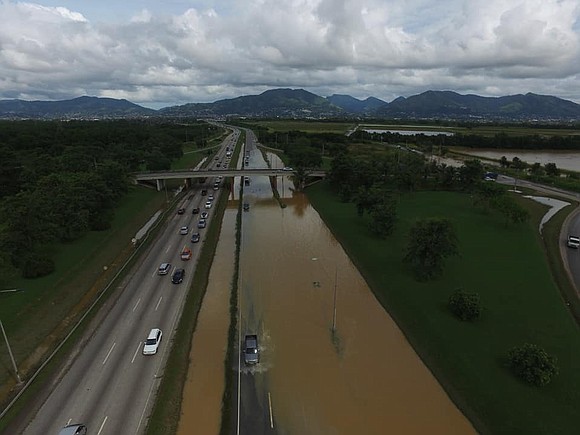 Many citizens of Trinidad and Tobago would be justified in saying that the second half of 2018 was more than a bit unkind to the Caribbean’s most southerly island, as it has been battered by one disaster after another.

Over the weekend, large parts of eastern, central and southern Trinidad were inundated by floodwaters from heavier than usual rains associated with a disturbance in the so-called intertropical convergence zone that also dumped unseasonal rains on nearby Guyana, Suriname and French Guiana.

As authorities struggled to bring relief supplies to nearly 200,000 people whose homes and businesses were under muddy, brown, dirty floodwaters, the island was hit by two earthquakes over the weekend, with the strongest being measured at 5.8 by monitoring centers. This tremor is on top of the one in late August that damaged more than 200 buildings.

Ordinary residents and engineers blamed the situation on poor drainage systems and the propensity for large scale construction in areas that should be left as open spaces to absorb rain waters. Rather than endure wading through the filthy waters and risk dying of leptospirosis and other diseases, some residents climbed onto their roofs and slept overnight under open skies until relief came or until floodwaters had receded.

Prime Minister Keith Rowley declared a national disaster, but his cabinet refrained from imposing curfews and other restrictions and kept schools and state offices open for business as the workweek began.

As emergency crews battled anacondas, caimans and other dangerous animals seeking dry ground, critics heaped tons of blame on authorities, the emergency response management agency, the military and the police in particular, contending that the country had close to a full week of warnings about heavy rains to prepare.

As the rescue and response effort gets into full gear, the weather office Monday warned citizens to brace for more rains up to midweek, rains that could push rivers that have already overflowed their banks onto roadways and into homes and businesses to rise even further.

Rowley said he will ask the cabinet to immediately approve emergency funding of approximately $4 million in relief supplied to people trapped in homes or in communities cut off by debris, fallen trees and water.

“We have re­ceived no re­ports of ca­su­al­ties, but I have heard many sto­ries of close calls,” said Rowley. “My fo­cus at this time is on the con­di­tions at the shel­ters, mak­ing sure that peo­ple housed there have cots, blan­kets, food and oth­er sup­plies. This is a na­tion­al dis­as­ter. The flood­ing is quite wide­spread and quite se­vere and it is go­ing to cost a lot of mon­ey to bring re­lief to peo­ple who have been af­fect­ed. Notwith­stand­ing what­ev­er short­ages we are ex­pe­ri­enc­ing, we will have to find the re­sources to help.”

Seeking to cash in on any lapses by government, opposition leader and former Prime Minister Kamla Persad-Bissessar joined other citizens in criticizing the slow response of some agencies and alleged lack of preparations for the situation despite early warnings from the meteorological office.

“The torrential rains that we have experiences over the past three days and the resultant catastrophic flooding has transformed areas of our country into virtual disaster zones,” she said as locals plastered social media sites with images of the flood and of districts cut off by the disaster. “No steps were taken by the government to prevent and avert the suffering and hardships that have been inflicted upon our citizens. The government must act now and forthwith.”