The hidden history of the African-American experience 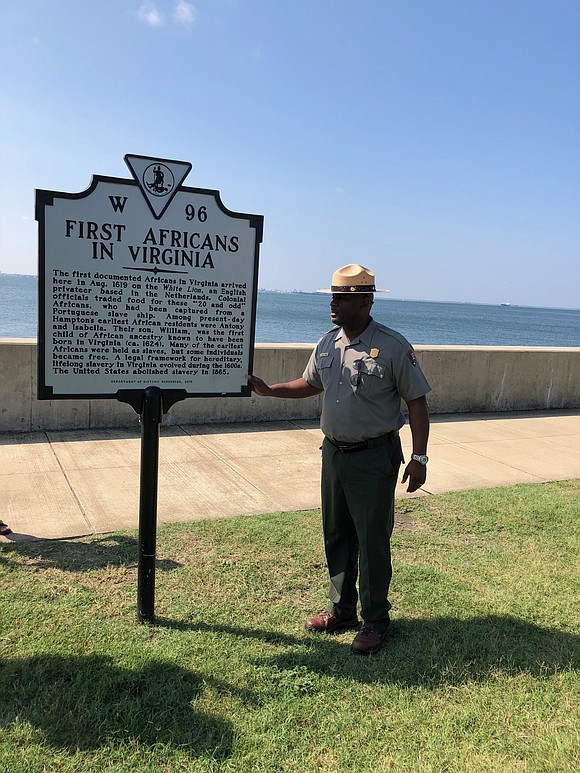 When it comes to the story that needs to be told about the experience of Africans in America (African-Americans if you will), the term “Hidden Figures” is an understatement. It is in this term that we can find ourselves, and this term we can identify with. We can remember this term from the recent movie about the NASA mathematicians Katherine Johnson, Dorothy Vaughan and Mary Jackson, who played a crucial role in launching astronaut John Glenn into outer space.

Ironically, this historical event took place in Hampton, Va. The same place where I recently visited to participate in the American Evolution Virginia to America 1619-2019 tour. I was able to visit many historical markers of the African experience in Virginia. Around this time next year, the tour will be hosting the 400-year anniversary of the first Africans’ arrival in America. As you read my recap of this experience, my hope is that you not only are inspired to attend this tour in 2019 but also are moved to research our rich history in this nation—a history that runs deeper than the valleys of the Grand Canyon. We the Africans in America were bought here by force to give white colonizers centuries of free labor from which they still profit to this very day. We are indeed the cornerstones of this nation, the builders who have been rejected.

Let’s begin at Ft. Monroe, where the tour began. On our first stop, we were able to visit the marker of the first Africans’ arrival in America. This portion of our tour was led by Terry Brown, superintendent of the Fort Monroe National Monument, with assistance from his colleagues, Phyllis Terrell, director of Communications of Fort Monroe, and Glenn Oder, executive director of the Fort Monroe Authority. The marker is a symbol of the time in August 1619, when on board an English ship, the White Lion, sailing with Dutch letter of marque, 21 Africans who were captured from land that would become the country of Angola arrived as cargo to what is known today as Ft. Monroe. These Africans, who were traded for food, were the first of our ancestors to arrive in what was known as colonized English America. “These Africans became crucial to the survival of the Europeans, eventually becoming the foundation of Virginias agricultural system and essential to its economic viability,” stated American Evolution.

As Brown continued on through our tour, we were bought to the actual war fort, which in the year 1819, 200 after the arrival of the first Africans in colonized America, the enslaved Africans were contracted to build. We learned here that there is an account and record of every enslaved African’s work log, as well as how much profit their European “masters” made from their free labor. As we were taken down the timeline of Ft. Monroe, we also learned that 42 years after enslaved Africans built the fort, May 24, 1861, three enslaved Africans by the name of Frank Baker, Sheppard Mallory and James Townsend, on a quest for freedom set out by boat and arrived at Ft. Monroe where they asked for sanctuary. This incident occurred during the Civil War, and the Confiscation Act required all escaped slaves whose owners were not in rebellion against the Union to be returned to the individuals who claimed to own them. At this time, post commander General Benjamin Butler decided that these Africans, who were considered property by law, would be declared as contraband of rather than handed over to the emissary who came the next morning to claim them. This declaration marked the beginning of what would be known as Freedoms Fortress. As word spread through the African-American community, Ft. Monroe became the new home for many enslaved Africans searching for freedom.