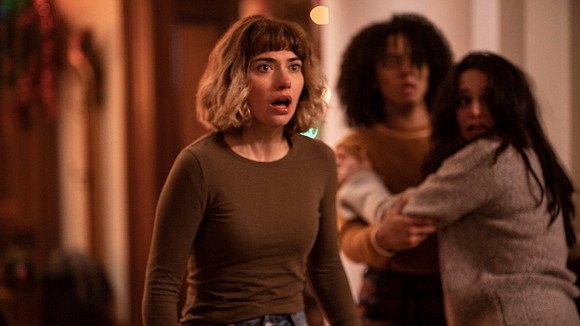 It’s the holiday season and there is something special for horror fans—“Black Christmas”—directed by Bob Clark (“Porky’s” and “A Christmas Story”).

“Black Christmas” is another remake of the 1974 cult classic but this time it’s rooted in something contemporary and interesting.

Once again there are beautiful sorority girls in danger of being hacked to death by a demented and mysterious killer. The new women in the new version of “Black Christmas” are not weak and waiting to be massacred. These women have proverbial “balls” and won’t go down without a fight.

The girls are seniors at Hawthorne University. They are spending their last night of the fall semester on campus before the holidays. You would think they would be focused on hooking up and dancing but instead, they are pondering on all the ways that frat men and frat houses, and men through the ages have created a system––nay a culture––of bullying.

Riley (Imogen Poots) who was sexually assaulted (three years ago) at a frat party after she had passed out lays out the aftermath of such a violation. This horror film jumps right in tackling the culture of frats and how it blends into rape culture along with the devotion of binge partying where young men try to get young women blind drunk. The reason? To break down their resistance to get them to say yes to sex.

Years ago Riley accused Brian (Ryan McIntyre) of raping her but she wasn’t believed because the college culture embraces what-happens-at-the-frat-bash-stays-at-the-frat-bash (much like that Vegas ad) where “bad” behavior gets a cheeky wink.

Riley’s friend Kris (Aleyse Shannon) brings up these issues with enthusiastic vigor. She’s a college activist who’s fighting against white-supremacist patriarchy. Her big goal is to fire Professor Gelson (Cary Elwes) a man with a chip on his shoulder who often turns his classroom into his rage room.

What makes this horror film different is the women-versus-men angle.

During the holiday season, the sisters of M U Kappa perform at the holiday party in elf suits and they turn the festive song into a song-and-dance number about the rape culture and Riley sings this directly at Brian.

The frat boys love their hazing rites and crazy rituals. We watch the ceremony where the pledges wear medieval robes and masks and stand before a bust of the college’s founder that cries tears of black blood (creepy).

Soon people begin to die, and the women want to find out who’s doing this to them and why. When they go back to the frat house the film turns into an over the top showdown. It’s fun. It’s Christmas and it’s a slasher flick with a holiday theme. Campy enough? It’s fun.