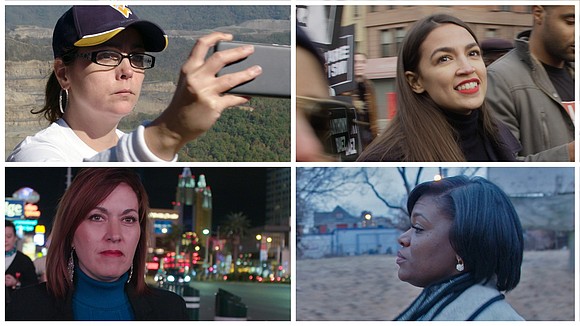 "Knock Down the House"

The ninth annual Athena Film Festival, co-founded by the Athena Center for Leadership Studies at Barnard College and Women and Hollywood, will take place Feb. 28-March 3, 2019, at Barnard College in New York City. AFF showcases films, television and content that tell the extraordinary stories of fierce and fearless female leaders from all walks of life. Stories of ambition, courage and resilience amplify the voices of strong, bold women, curating a public discourse on gender equality, and changing the cultural conventions surrounding leadership.

The festival will open on Thursday, Feb. 28, with the New York premiere of “Fast Color.” The film, directed by Julia Hart and written by Hart and Jordan Horowitz, stars Gugu Mbatha-Raw as a hero forced to run when her superhuman abilities are discovered. Years after abandoning her family, the only place she has left to hide is home. Lorraine Toussaint and David Strathairn co-star.

The festival will close on Sunday, March 3, with the New York premiere of the documentary “Knock Down the House,” directed by Rachel Lears, and featuring N.Y. Congresswoman Alexandria Ocasio-Cortez. The film centers on a young bartender in the Bronx, a coal miner’s daughter in West Virginia, a grieving mother in Nevada and a registered nurse in Missouri, as they build a movement comprised of insurgent Congressional candidates who challenge powerful incumbents. One of their races ultimately becomes the most surprising political upset in recent United States history.

The festival’s documentary and narrative centerpieces were also announced. The documentary centerpiece, “This Is Personal,” is directed by Amy Berg, featuring Tamika Mallory and Erika Andiola. While the 2016 United States presidential election catalyzed the Women’s March and a new era of feminist activism, Tamika and Erika have been fighting for their communities for years. Their stories expose the fundamental connection between the personal and the political, and ask, how can intersectionality birth a new social justice movement? The narrative centerpiece, “Out of Blue,” written and directed by Carol Morley, will have its U.S. premiere at the festival. Patricia Clarkson stars as Detective Mike Hoolihan, who is called to investigate the shooting of a leading astrophysicist. As Mike tumbles down the rabbit hole of the disturbing case, she finds herself grappling with cosmic secrets that may hold the key to unraveling the crime, while throwing into doubt her very understanding of reality.

“We are thrilled to announce our phenomenal lineup of films for this year’s festival,” said Melissa Silverstein, co-founder and artistic director of the festival and founder of Women and Hollywood. “The Athena Film Festival’s goal is to showcase the diverse work of women leaders, and this year, we have some incredible films and stories that aim to change the narrative and highlight important topics.”