HISTORY MADE: Letitia James sworn in as first African-American and first woman to serve as New York State Attorney General 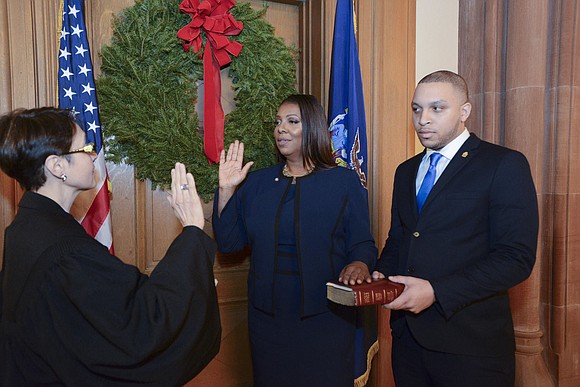 Just before midnight Tuesday, Letitia James officially became the 67th attorney general for the State of New York. James’ inauguration is historic as she is the first African-American and the first woman elected to the office.

In a ceremony held at the State Capitol in Albany, James took the oath of office and committed to protecting the values and interests of all New Yorkers.

James stated, “It is the highest honor to officially begin my time as the attorney general for the great State of New York. Tonight, I made a commitment to use the rule of law to protect the rights and advance the interests of all New Yorkers, and I will never waver in upholding that promise. New Yorkers in every corner of our state must know that they have a champion fighting for them every day.”

After the official swearing-in at the Capitol in Albany, James participated in an inauguration ceremony on Ellis Island on New Year’s Day. As she was sworn in, longtime mentor and former New York City Mayor David Dinkins looked on.

“I believe in the rule of law and democracy and the expectation that in the eyes of government, you shall be treated no worse than your neighbor on the right and no better than your neighbor on the left,” James said during her inauguration speech. “I will work in a legal system where even the most powerful federal official in the country cannot use a loophole to evade justice.”

James is set to host several informal meet and greets throughout the state to connect with New Yorkers and introduce them to the office and her priorities. Events throughout the month will be held in Brooklyn, the Bronx, Manhattan and Queens.