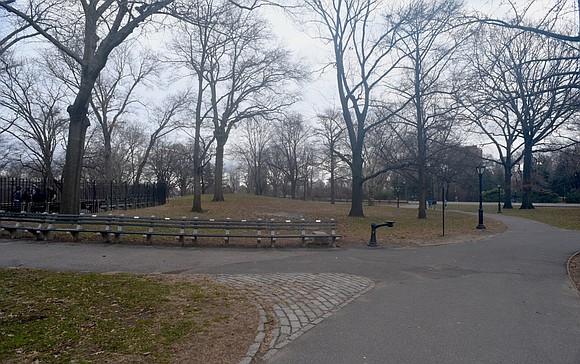 Central Park is the most visited urban park in the United States, receiving approximately 37.5 million visitors annually. However, what many visitors don’t know is that a portion of the park was once home to a thriving Black community in the 1800s.

Before the city built Central Park, the area from West 82nd to West 89th streets and between 7th and 8th avenues was the location of what was known as Seneca Village, a predominantly African-American community that included the largest group of African-American property owners in New York at that time. The village existed from 1825 to 1857.

At the time, most of New York City lived in Lower Manhattan. By the 1820s, people started moving uptown. Seneca Village was a self-contained community of Blacks, English, Native-Americans and German and Irish immigrants. It had its own school, three churches and cemeteries. By 1855, census records show that the population had reached approximately 225, made up of roughly two-thirds African-Americans.

“Seneca Village had approximately 50 homes, three churches and one school. A local spring supplied fresh water, and there is some evidence that residents had gardens and raised livestock,” said Central Park Conservancy’s historian, Marie Warsh. “Approximately half of the African-American population in Seneca Village owned their homes, making it the largest community of African-American property owners in 19th century New York City.”

In 1825, John and Elizabeth Whitehead began selling pieces of their farmland. A young African-American man named Andrew Williams bought the first three lots for $125. Two dozen plots were sold to members of the the African Methodist Episcopal Zion Church, which was the largest and wealthiest Black church community in the country.

Black residents were living in Seneca Village and owned land while slavery existed in the South.

In 1857, with plans to create an urban park in Manhattan, the state of New York used eminent domain to evict residents and acquire the land. The community was never moved or re-established.

“The creation of Central Park resulted in the dissolution of Seneca Village,” Warsh said. “To create Central Park, the New York State Legislature authorized the use of eminent domain, the power of a government to take private land for public use, with compensation paid to the landowner. This was common practice in 19th century urban America, and a similar use of eminent domain had been used to build Manhattan’s grid of streets decades earlier.”

This year the tour has been enhanced to include results of research and archaeological excavations conducted by the Institute for the Exploration of Seneca Village History. An excavation conducted in the summer of 2011 uncovered the remains of the buildings in Seneca Village as well as artifacts related to the domestic lives of residents.

Additional archaeological testing was conducted in 2014. The discoveries ushered in an updated tour, and there will be a larger interpretative plan for Seneca Village, which will include the installation of interpretative signs in the area in the spring.

“These artifacts allow us to have a greater understanding of what life was like in Seneca Village,” said Warsh. “With this newly enhanced tour we are encouraging educators to come first to familiarize themselves with the material so that they can start to explore opportunities with us for introducing students to this important history.”

Go to http://www.centralparknyc.org/events/parent-events/seneca-village-tour.html for more information about Seneca Village.