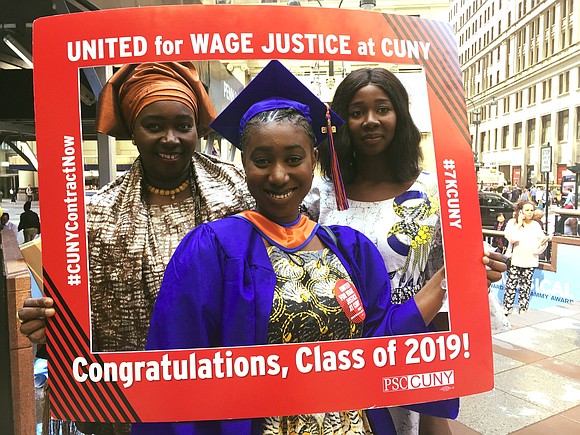 The union representing professors and academic staff at the City University of New York picked a new place to push for a new contract: student commencements.

Beginning at the end of May, the Professional Staff Congress, the union representing CUNY’s 30,000 professors and academic staff, conducted a series of public actions at CUNY commencements calling on CUNY management to engage in and resolve contract negotiations. They’re asking for a contract with competitive salaries similar to other universities of similar ranking and an end to the exploitation of adjunct professors. The union also wants more overall funding for CUNY.

“Our folks are distributing almost 50,000 stickers and flyers during these events,” said PSC-CUNY President Barbara Bowen. “It’s a congrats message, but it’s also a call to action addressing students and their families.”

Faculty and staff, along with some students, handed out flyers to parents and other family members attending their loved one’s graduation. The flyers asked parents to contact CUNY’s management and urge them to come to a deal with PSC-CUNY and devote more funding to the university.

“As the professors and staff who have been privileged to be part of your college education, we join you in celebrating your graduation. And we thank your families and friends for their support,” read the flyer. “Nobody makes it to a college degree without a network of supporters. As you celebrate today, please help us to make sure that the next generation of CUNY students has the resources they need for a great education. We are calling on the City and State to fund better conditions for students, competitive salaries for faculty and staff, and an end to near-poverty wages for adjunct faculty. Tell New York to fund quality education and wage justice at CUNY.”

Students were photographed holding a sign the said “United for Wage Justice at CUNY” and used the hashtag #CUNYContractNow. The union has been in a contract fight for 18 months and is still bargaining with CUNY management.

“The sticking point in this contract as well as the last one is funding,” said Bowen. “The university has been significantly underfunded in recent years. Settling the contract means getting money to fund the contracts and the state has been slowly reducing funding for CUNY per student.” Funding from the city at the senior colleges has been flat for decades.

According to the union, adjuncts are paid near-poverty wages, which they feel is unconscionable considering the cost of living in New York City. The union has received outside support from the likes of feminist author Roxanne Gay who said on Twitter, “Pay the CUNY adjuncts the $7k a class they are asking for. Honestly that’s not enough but it’s a start.”

Students have also joined the fray in showing solidarity with PSC-CUNY by wearing stickers on their caps and gowns, something that Bowen appreciates.