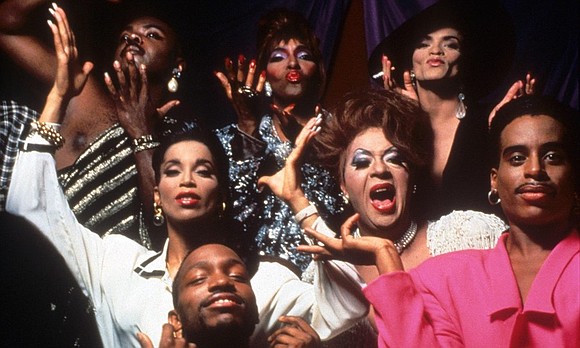 As the film begins, we hear a voice describing a conversation with their father: “You have three strikes against you in this world. Every Black man has two: that they’re just Black and they’re male. But you’re Black and you’re male and you’re gay…. If you’re gonna do this, you’re gonna have to be stronger than you ever imagined.”

New York—not to mention the world—has changed in so many ways since “Paris Is Burning” was released in 1990. We see the World Trade Center in more than one of the scenic shots; people of the same gender can now marry in the United States and several other nations. But that essential truth of the Black male and the Black gay male experience remains as true today as it was in the late 1980s.

“Paris Is Burning” provided many, this critic included, their first introduction into the drag ball scene that at the time was a world unto itself. Before the age of “RuPaul’s Drag Race” or the FX channel’s “Pose,” for us outsiders it was a world that was hard to imagine: Black and Latin gay men performing for each other, creating a world that didn’t exist but needed to be created so that they could find a way and a community in order to survive. The ball scene brought us voguing, reading and dragging. While many have scrutinized the filmmaker Jennie Livingston for profiting at the expense of those she documented it is still a fact that this film gave the United States and the world an opportunity to begin the slow opportunity to understand a community that had been, and still is, oppressed.

The film introduces us to the various Houses that make up the ball community and the mothers of those houses and their children. A gay street gang is what one mother calls the Houses and while the Houses of Xtravagnza, LaBeija and Ninja do not have physical addresses they were very much homes for the young Black and Latin men who took their names, often after being shunned by their biological families. These children performed, often in the wee hours of the morning at rented Masonic Lodges or VFW halls, strutting and strolling on the floor, trying to outdo each other in a wide variety of categories. The film takes us into a world that is 100 percent unapologetically Black, Brown, gay and fabulous.

The audience learns about “realness:” the ability for a man to pass undetected as a woman. That being real, being able to pass is for some the ultimate goal because at the time, and for some it is still the case that being openly who you are is at the least dangerous and all too often fatal. We hear the dreams of these children that to some of us seem normal but when they speak about traveling to Japan or being recognized they sound as if they are speaking about traveling to the stars. Some do want magazine covers and the spotlight but others simply want marriage and a home of their own.

It says something about America that young gay men and trans women can now have a spouse and even achieve fame and it says something else about our nation that they are also being murdered as well.

“Paris Is Burning” is a trip to the past, a window on a community, a mirror held up to ourselves and even a glimpse into the future. It is well worth seeing again or for the first time and gives us a chance to think about where we were, how far we have come and this distance we still need to travel.

“Paris Is Burning” will run in a new restoration at Film Forum. Located at 209 West Houston Street in Manhattan from Friday, June 14, through Thursday, June 27. For show times and more information, visit filmforum.org or call 212-727-8110.