‘Us’—Jordan Peele’s follow-up to his Oscar-winning debut, ‘Get Out’ 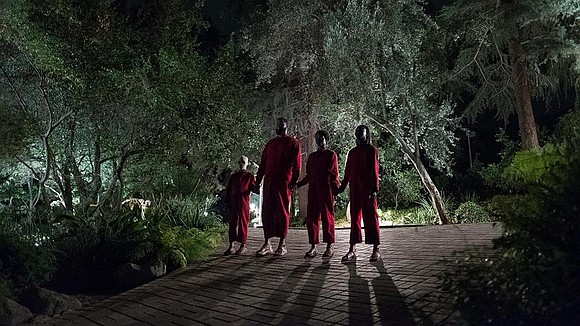 It’s challenging to review “Us” as there are many spoilers that occur in the first 10 minutes of the film. It’s being positioned as a horror film that is working on layers with sharp allegories that focus on the country’s growing racial tensions. I’ll buy that, for now.

In his second feature, which he described in a video message as an example of “Black excellence,” Jordan Peele delivers the film with fully loaded nightmare-inducing images of tunnel-dwelling, bloodthirsty döppelgangers who’ve come to claim the privileged lives their “aboveground” counterparts have been enjoying without an ounce of gratitude.

The film arrives in a shroud of secrecy and the less you know going in about “Us” the better. Their marketing plan is almost (almost) as confusing as the film. Example, once you’ve experienced the film the filmmakers are encouraging a conversation online but again—without giving away key spoilers—what kind of meaningful conversation can any viewer really have? Let me answer, none …

“Us” begins with young Adelaide wandering away from her parents in an amusement park during a trip to the Santa Cruz boardwalk. She’s eerily attracted to the beach and keeps walking toward the great unknown. She takes a detour into a funhouse and there something happens while the youngster is exploring the hall of mirrors: during a storm, the power goes out, and she comes face to face with something more than her reflection.

Set in 1986, this encounter unhinges Adelaide so deeply that she suppresses the memory for over 30 years—which is exactly where the film picks up, in the present day.

All grown up, Adelaide (Lupita Nyong’o) is now happily married to Gabe Wilson (Winston Duke) and the mother to two kids Zora (Shahadi Wright Joseph) and Jason (Evan Alex). The family’s best friends are Josh (Tim Heidecker) and Kitty Tyler (Elisabeth Moss) who have twin teenage girls. It’s interesting to note that their friends are rich and white. They are all heading back to Santa Cruz for their summer vacation.

Inside Peele’s world, we already know that if something appears picture perfect then there is something sinister lurking just under the surface. In this film, he uses the idea of döppelganger which is a subgenre to really push into the deep hidden, internal fears that millions share. Peele is a clever social commentator. He knows how to slowly get under our skin and stay there. He’s been honest in the messaging from the start, stating: “We have met the enemy, and he is us.”

Flash forward to tomorrow’s headline and I’m confident that “Americans” will still be spending a lot of time worrying about what the “other” people are doing or not doing in this country. And by other, I mean immigrants, unfamiliar races and African-Americans. “They” are so concerned about the “others” that they give little thought to the 1 percent that actually run the entire world. It’s too scary a thought while looking at your own reflection to imagine that you are a slave, a clink in the machine, useless and utterly replaceable.

You’ve seen the scene in the trailers, where the youngest, Jason, peering out of the window announces, “There’s a family in our driveway,” an innocent statement that is actually a declaration of war.

The terror that the unwelcomed family, mother, father, daughter, and son is about to unleash on the Wilson family is just about to begin, when Adelaide calls the cops, only to find that it will take 14 minutes before they will arrive.

Gabe steps up and does the manly thing, stepping outside to have harsh words with the unwelcome family that doesn’t leave. In a split second, the assault begins and it never lets up. An interesting note: the police never arrive so when the N.W.A.’s classic song “F— tha Police” starts playing over a crucial scene we get the full weight of the situation.

It doesn’t take long before the four uninvited guests are sitting inside the Wilsons’ living room and surprise, surprise, they look exactly like them. We will learn that they are called “the Tethered.”

Like in most horror films, there is very little explanation on the evil family’s origin, Peele lets the viewer’s imagination create our own worst-fear scenario. To keep it simple, it’s only Nyong’o’s döppelganger that can speak, but her words come out very strained. The Tethered seem to communicate using guttural animal noises and supernatural instinct.

There are many things in the film that don’t seem “right” that frankly would fail a logic test. One is the suggestion that these “nonverbal” Tethered have been cleverly manipulating us all along—really, how? And that these beings can anticipate a human being’s every move, and beat us at every turn, again, really, how?

Desperately trying not to share any spoilers, it’s hard to comprehend that the non-verbal Tethered seem to have become a deadly killing machine, knocking off a large part of the country, but not the Wilson family. How’s that possible? Not taking anything away from our Black family, they fight for their lives using golf clubs, fireplace pokers, baseball bats and other blunt objects. And just like Black people in this world, we are very, very, very hard to kill.

Then we come close to the end and here’s where I feel the film really stands on shaky ground, like earthquake-shaky ground. Peele attempts to explain the Tethered master plan (What?) taking us deep into the belly of the earth where the last, big fight for survival is waged. To keep the spoilers away, I can’t dive into the what Peele may or may not mean in taking us underground. Is it an elaborate metaphor? Did he create this to help us connect to a sinister domain as a visual allegory, exploring the darkest aspects of our own civilization? Is he forcing us, one last time, to be brave when confronting the monsters within each of us? I don’t know. I doubt after watching “Us” that you will have an answer, either.