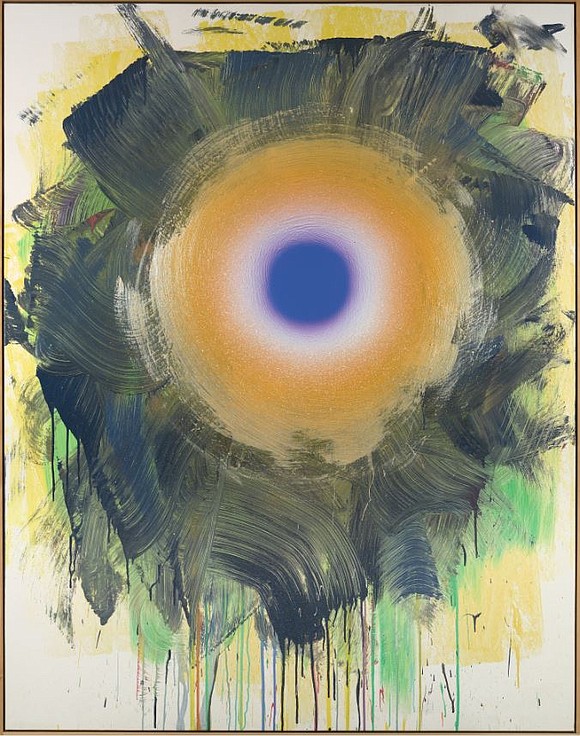 In an interview in BOMB magazine a few years ago, artist James Little declared, “I choose to be abstract because that’s where I found my voice, because it best reflects my self-determination and free will. That’s why I love abstraction, it forces us to see things in a different way. It forces us to come out of what we have been trained and conditioned to see. It forces us to use another part of our brain.”

Little’s love for abstract art is now literally on display at the Art Students League, where he is also an instructor. Titled “New York-Centric,” it is an exhibition curated by Little that will run through May 1. As described in promotional materials from the 144 year old institution, “New York-Centric” is, “An exhibition dedicated to color, color theory, design, expressionism. All of the work on display was produced in New York during the latter half of the 20th century or the beginning of the 21st century.”

A reception at the Art Students League kicked off “New York-Centric” last Thursday evening. Little, who was also commissioned by Governor Cuomo to create the artwork for the LIRR Jamaica Station renovation, spoke a bit about some of his thoughts going into the project.

Admitting to slight intimidation when he was asked by Art Students League Director Michael Rips to curate a show, Little likened the initial request to, “The moment the pope asked Michelangelo to paint the Sistine Chapel.” A brilliant abstract painter distinguished by his strict discipline, a vast depth and breadth of knowledge of art theory, and commitment to purity, Little was up to the task. Not surprisingly, he chose to showcase just abstract art for this exhibition.

Speaking to the Amsterdam News, Rips remarked that part of the reason why he chose Little to curate this exhibition is because he considers Little, “One of the greatest artists of our time. He has,” he proclaimed, “redefined abstraction in his use of geometry and color.” More specifically, Rips went on, “There’s a meticulousness to it that’s inherent to geometry, but the colors speak to a spirituality and a wildness that in one painting, to have that balance is an extraordinary accomplishment!”

What you won’t find at “New York-Centric” is sculpture or collage or ink drawings. There are only paintings, and that too, was a deliberate choice in Little’s part. “I wanted it to be about the paint,” Little explained, “Painting is considered this archaic form and I knew it was not true. I wanted to get back to paint and the relationship that artists have with paint and color, geometry, expressionism, shape and form.”

You also won’t find non-American artists or any who were based anywhere but in proximity to New York. Little stated, “I wanted to focus on artists that worked in the general area of New York. New York painters bring something to painting that you just can’t get anywhere else. Also, this is American art. I wanted it to be authentically American. I wanted the ideas to be American and I wanted the freedom to be American.”

His choice of artists also symbolize cautionary tales for younger artists about the type of challenges they may face. “They made these beautiful paintings but making this work took a toll on these artists. This is very difficult work. It requires a lot of self-discipline, a lot of confidence. A lot of them suffered from alcoholism and that kind of thing.”

Bill Hutson, one of Little’s friends, and one of the exhibiting artists, was in attendance at the reception. Dressed regally in black kufi hat with gold embroidery, Hutson agreed that creating this type of art can be tough. “Sometimes I still don’t know what the heck I’m doing. It’s all still a mystery and an adventure!” Still, Hutson’s love for abstraction is steadfast. “It’s still the only game in town for me,” he exclaimed.