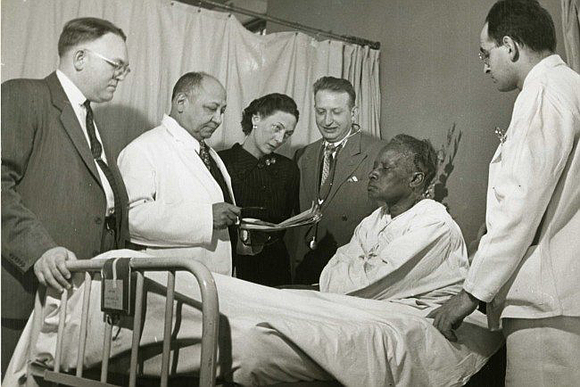 Dr. Myra Adele Logan is with Dr. Louis Wright to her right at Harlem hospital

It is commonly known that Dr. Daniel Hale Williams was among the first doctors to perform a successful open-heart surgery in 1893. Much less known is that Dr. Myra Adele Logan, who 50 years later in 1943, was the first woman to perform an open heart surgery.

She was born in 1908 in Tuskegee, Alabama, the youngest of eight children. Her mother, Adella Hunt Logan, was a college graduate and politically active in the suffrage and health care movements. Warren Logan, her father, was the treasurer and a trustee of Tuskegee Institute and the first staff member chosen by the school’s founder Booker T. Washington.

These connections made it possible for Myra to begin her education at Tuskegee’s Laboratory, the Children’s house. After graduating with honors from Tuskegee High School, she attended Atlanta University and graduated as valedictorian of her class in 1927. Her next stop was in New York City at Columbia University where she earned her master’s degree in psychology. For a while she worked for the YWCA in Connecticut before beginning pursuit of a career in medicine.

Myra was the first person to receive a four-year $10,000 Walter Gray Crump Scholarship, which was exclusively set aside for assisting African American students desiring to attend New York Medical College. (Was this the Dr. Crump that Kuwana Haulsey cited so warmly in her book “Angel of Harlem” about the life of Dr. May Chinn?) In 1933, she graduated and did her internship and residency in surgery at the Harlem Hospital in New York City.

Later she became an associate surgeon at the Harlem Hospital where she would spend the bulk of her medical career. She was also a visiting surgeon at nearby Syndenham Hospital and maintained a private practice. In 1943, she became the first woman to perform open-heart surgery, the ninth such operation. Following this accomplishment she began devoting herself to children’s heart surgery. Along with this specialty, she also helped to develop antibiotics, including Aureomycin.

She was part of a team of doctors who treated 25 lymphogranuloma venereum patients with Aureomycin and gained positive results. The antibiotic was proved to reduce gland size of eight Buboes patients after four days of treatment. Myra published the results in the Archives of Surgery and the Journal of American Medical Surgery. She also published her results on Puromycin in several medical journals and archives.

A year after her medical breakthrough, Myra married the painter Charles Alston April 8, 1944. They met while Alston was working on a mural project at the Harlem Hospital. She was a medical intern in 1936 when they met and she served as a model for the mural Modern Medicine, in which she appears as a nurse holding a baby. That mural has been recovered, restored and now can be seen in the Hospital’s spacious gallery.

In 1951, she was elected a Fellow of the American College of Surgeons and was the first African American woman to become a member of the group. During the succeeding decade, she devoted her time and research to the treatment of breast cancer, which led to the development of X-ray processes that could more accurately detect the differences in tissue density, thereby allowing tumors to be discovered.

Myra was also an outspoken member of the New State Commission on Discrimination during Gov. Thomas Dewey’s administration. When the governor shelved anti-discrimination legislation in 1944, Myra resigned. They had invested a lot of time and commitment to have their draft scrubbed.

Not only was she brilliant in the operating room, Myra was also an accomplished classical pianist. After her retirement from medical practices in 1970 she continued to serve on several boards, including the New York State Workmen’s Compensation Board. She died of lung cancer at Mount Sinai Hospital Jan. 13, 1977.