One in eight New Yorkers are food insecure 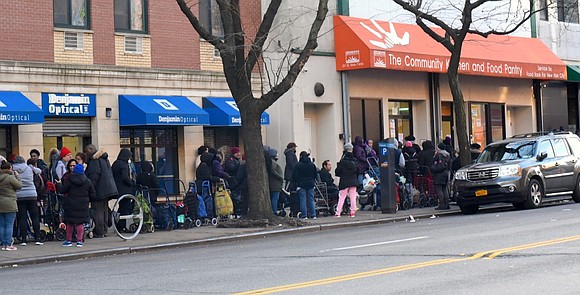 Over 1 million New Yorkers are suffering from this hunger amounting to one in eight people, according to an upcoming report being released by Hunger Free America.

As the Thanksgiving holiday commences, soup kitchens and food pantries across the city are preparing for the holiday by gathering mass donations and packaging food for families. Several organizations across the city have stepped up with volunteers to handle the demand.

City Harvest, the city’s largest food rescue organization, recently kicked off its annual Repack to Give Back event at its Food Rescue Facility in Long Island City. The event runs through Friday. Hundreds of volunteers from companies across the city packed a total of 6,000 holiday meal boxes with fruit, vegetables, pasta, stuffing, gravy and rice.

The meal boxes will help 24,000 New Yorkers put Thanksgiving meals on their tables. Teams of 20-50 volunteers worked together in two shifts each weekday during the duration of the event.

“It’s inspiring to see so many volunteers and companies come together during this week-long event to assemble meal boxes for our neighbors in need,” said Eric Eckholdt, executive director of Credit Suisse Americas Foundation and director of Americas Head of Corporate. “As a year-round partner of City Harvest, Credit Suisse is dedicated to helping City Harvest ensure that no New Yorker goes hungry during the holiday season, and throughout the year.”

In another recent act of kindness, organization Win (formerly Women in Need) hosted a Thanksgiving meal for more than 200 shelter residents supported by StreetEasy. Homeless mothers and children enjoyed a sit-down Thanksgiving meal of turkey and trimmings.

While volunteers and donations are plenty this time of year to help out, an analysis released this week by Food Bank for New York City says pantries are still having a hard time meeting the demand.

“Our city has a record low number of soup kitchens in operation, and lack of resources mean that in some high-need communities, few—if any—emergency food providers are open on evenings or weekends,” said Food Bank President and CEO Margarette Purvis. “By building the capacity of charities operating in the deepest pockets of poverty in our city, we can start to fill the holes of our safety net and ensure critical resources are available to all New Yorkers.”

One group that remains hardest hit by hunger is the elderly. Nearly 11% of all seniors in New York City were food insecure from 2015-2017, a Hunger Free America report shows. The problem is particularly dire in the Bronx where 23.7% of seniors were food insecure during the three-year time period.

Hunger Free America CEO Joel Berg says that many seniors view SNAP (or food stamps) as a “handout” and feel that taking it is taking food away from others. Another issue is the process of getting food benefits.

“Some also see SNAP as troublesome to apply for because of the documentation required or the required interview that many believe to be in-person only,” Berg said. “Also, many of our older clients are either non-English speakers or have Limited English Proficiency, which deters many of them from applying for this vital benefit.”

In an effort to increase their services to reach even more seniors in New York City, since September, Hunger Free America has been conducting screenings at senior centers and other community centers to determine eligibility for SNAP.

In another act of kindness, Citymeals on Wheels raised $1.2 million at its annual Power Lunch for Women. The money will be used to prepare and deliver over 150,000 meals for the city’s homebound elderly. The organization delivers 2 million meals to more than 18,000 homebound elderly across the city each year.

Citymeals on Wheels executive director Beth Shapio said that poverty is increasing among older New Yorkers and one in 10 is food insecure.

“No one anticipates growing old alone and unable to manage even a single flight of stairs,” Shapiro said. “The people who rely on Citymeals—frail aged New Yorkers in their 80s and 90s and 100s—are the people who built this city and we will continue to celebrate and care for them.”