The Giants have an array of options with the No. 4 pick 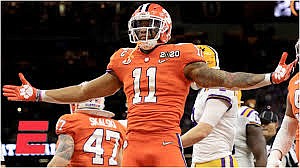 The Giants’ needs are extensive. They finished the 2019 season ranked 25th in offensive efficiency and 28th in defensive efficiency. Their defense’s 28.2 points per game allowed average was third worst in the NFL.

Entering tonight’s first round of the NFL Draft, the first remote draft in the league’s history due to the coronavirus pandemic, the Giants hold the No. 4 overall pick. With several priority positions to be addressed, the team’s general manager Dave Gettleman and head coach Joe Judge will work together to determine if they will select the highest graded player on their draft board regardless of position or select the player whom they have graded the best at the position they deem to be most critical.

Gettleman will have the final say. His previous two top first round picks, running back Saquon Barkley at No. 2 in 2018 and quarterback Daniel Jones at No. 6 last April, provided the Giants two cornerstones of their rebuilding project. Barkley became an instant star and Jones showed promise as the franchise’s potential long-term quarterback.

Using their first round pick on a seemingly perpetual Giants endeavor to construct a solid offensive line may be the direction in which Gettleman and Judge are leaning, with left tackle being their primary focal point. Pro Football Focus, a website that conducts quantitative analysis of players and teams, ranked the Giants’ offensive line 17th in the league last season.

This draft has several enticing tackle prospects including Tristan Wirfs from Iowa, Jedrick Wills from Alabama, Andrew Thomas from Georgia, and Mekhi Becton from Louisville. Becton is the most intriguing. Becton is 6-foot-7 and 360 pounds; his rare athleticism for someone with his physical measurements—he ran an eye-popping 5.1 40-yard dash at the NFL Scouting Combine in February—and his room for improvement in the technical aspects of his craft are appreciable and arguably place him as the player with the brightest future among the left tackle crop.

However, Willis and Thomas may be better prepared than Becton to immediately stabilize the Giants’ left tackle spot, currently occupied by Nate Solder, who they signed in March of 2018 to the then largest contract for a tackle in NFL history (four years, $62 million), but who has not performed at the level they were expecting. Many scouts and coaches believe Wirfs will ultimately be the best of the bunch.

If the Giants hold on to the the fourth pick, as there is the possibility they will trade down to acquire an additional first or second round pick (they own pick No. 36 in the second round) and decide to select a defensive player, the general consensus is they will take versatile Clemson linebacker/strong safety Isaiah Simmons. At 6-foot-4 and 238 pounds, Simmons possesses many of the same football characteristics as Washington’s late, great safety Sean Taylor.

At 6-foot-2, 215 pounds, Taylor was listed as a free-safety and adeptly covered tight ends as well as the deep middle of the field. He also had a reputation as one of the hardest hitting players in the NFL in the mid and late 2000s. Simmons has comparable wide ranging skills and could instantly become one of the best players on the Giants’ defensive unit.