Katherine Johnson: a math genius who refined the space race 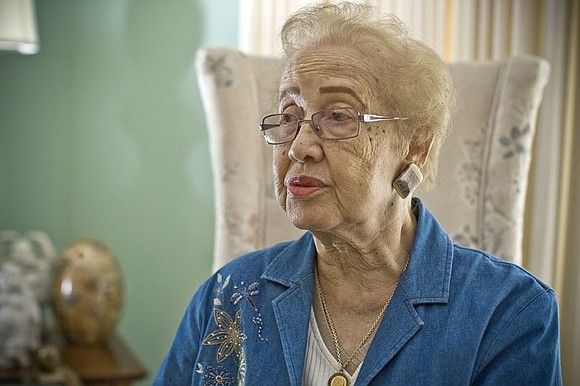 Former NASA mathematician Katherine Johnson is seen after President Barack Obama presented her with the Presidential Medal of Freedom, Tuesday, Nov. 24, 2015, during a ceremony in the East Room of the White House in Washington. NASA/Sean Smith/Public Domain photo

Katherine Johnson, the last surviving member of a triumvirate of notable Black women mathematicians in America’s space program, died on Feb. 24 in Newport News, Va. She was 101.

For all her breakthroughs as a mathematician at the National Advisory Committee for Aeronautics (NACA) which became NASA (National Aeronautics and Space Administration), Johnson and her cohorts—Dorothy Vaughan and Mary Jackson—had to await the arrival of the film “Hidden Figures,” based on Margot Lee Shetterly’s book, to step from the shadows.

In the film, Johnson is portrayed by Taraji Henson, who tweeted her gratitude, thanking Johnson for “sharing your intelligence, poise, grace, and beauty with the world. Because of your hard work little girls everywhere can dream as big as the moon! Your legacy will

The tributes to Johnson now flooding the media will add to what her remarkable career had already accumulated. Her acclaim was presaged almost from the dawn of her life that began in White Sulphur Springs, West Virginia in 1918. She was only 13 when she began high school on the campus at West Virginia State College, a historic Black college. Five years later she was a student at the college proper and her prodigious mathematical skills earned the mentorship of Professor W.W. Schieffelin Claytor, who was the third African American to earn a PhD in mathematics.

She graduated summa cum laude in 1937 and began teaching at a Black public school in Virginia. Subsequently, after the state began to integrate its graduate school, Johnson was among the first three Black students selected to enter the program. Before she could complete the graduate program, Johnson, then married to James Goble, dropped out to care for her three daughters. In 1952, she was told that positions were available at the all-Black West Area Computing section of the NACA’s Langley Laboratory, led by Vaughan. A year later Vaughan promoted her to the Maneuver Loads Branch of the Flight Research Division, a temporary position that soon was permanent.

When the Soviet Union launched its satellite Sputnik in 1957, it changed Johnson’s life. Her husband had died the year before of cancer, and she was poised for the new developments that came when NACA was superseded by NASA. Her expertise in trajectory analysis was crucial in the success of Alan Shepard’s May 1961 mission Freedom 7, the first human spaceflight. She had worked with Ted Skopinski in laying out the equations describing an orbital spaceflight and the specifications for landing. “It was the first time a woman in the Flight Research Division had received credit as an author of a research report,” Shetterly wrote.

Johnson would provide similar projections and analysis to John Glenn’s mission a year later. By now IBM computers were relied on for the work Johnson had been doing, but Glenn expressed some concerns about the calculations and insisted that Johnson double check the results. “If she says they’re good, then I’m ready to go,” he said. Not only was his flight successful it marked a turning point in the competition between the U.S. and the Soviet Union’s space race.

Johnson worked at NASA until 1986 where her calculations proved invaluable to the Space Shuttle program. She was bestowed with numerous honors and awards, including the Presidential Medal of Freedom from President Barack Obama.