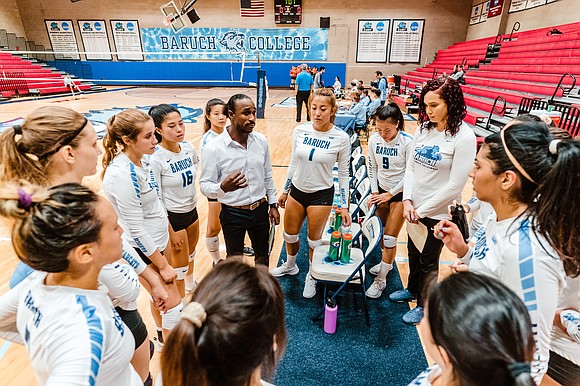 Baruch College men’s volleyball was dominating CUNYAC play when the season was halted due to COVID-19. In his fourth year as head coach, Kevin Edwards guided the Bearcats to the 2019 CUNYAC Championship and a spot in the Division III NCAA Tournament. He also coaches the women’s team, which made the ECAC quarterfinals last fall. Right now, he’s staying connected to student-athletes with weekly team Zoom calls.

Edwards, a veteran of international play with the Trinidad & Tobago national team (1996–2009), has been coaching in New York City for quite some time. Prior to joining the athletic staff at Baruch in 2017, he coached at John Jay College, NYU-Poly and the NYC College of Technology.

“In order to advance, I needed to find my way into one of the top schools,” said Edwards. Over the years, Baruch men’s and women’s volleyball have performed well, and his challenge was to exceed previous successes. His personal goal is to eventually move into coaching beach volleyball, which is growing rapidly at the collegiate level.

“[Coaching both the women’s and men’s teams at Baruch] is very challenging,” said Edwards. “The work never stops. There is no real off season. I love volleyball. I’m passionate about it. I get to do what I like every day.”

Due to the COVID-19 pandemic, this is the first time in more than 10 years that Edwards hasn’t been around a volleyball court. While practice and play are on hold, recruiting continues. He appreciates the high academic goals of Baruch student-athletes and their passion for volleyball despite there being no athletic scholarships.

“Their love of volleyball makes my job a little easier,” he said. “A lot of times in coaching, we do a lot of work trying to motivate athletes to want to do it. … With these kids…it’s the students’ decision to pick us.”

In addition to coaching at Baruch, Edwards works at Chelsea Piers Fitness as the beach and indoor volleyball instructor. There is group instruction for all interested parties and he does high performance training for individuals. Right now while play is on pause, he is working with the athletes on video analysis. He breaks down aspects of technique and offers suggestions for development. This includes local high school students hopeful of earning a Division I or II athletic scholarship in volleyball.

“Some of them come to me from freshman year of high school or even middle school,” Edwards said. “We go through all the technical stuff and they’ll go back to their [club] teams and flourish.”