Pan-Africanists strike out in Martinique 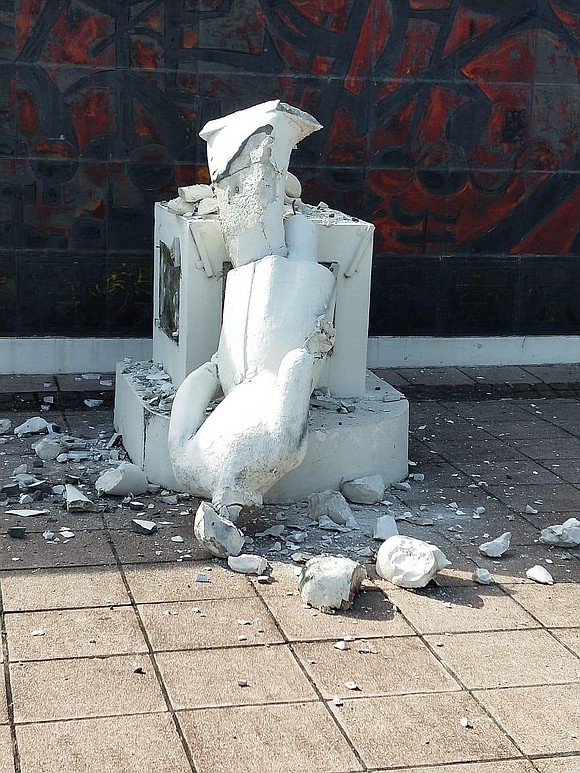 On the afternoon of Friday, May 22, members of the Pan-Africanist group Ligue de Défense Noire Africaine (LDNA/Black African Defense League) tore down and destroyed two famous statues on the island of Martinique. The statues were in honor of the French writer Victor Schœlcher who is famed for having prepared the April 27, 1848 decree that abolished African slavery in France’s colonies during the 19th century.

France’s President Emmanuel Macron denounced the actions of the LDNA activists. “By abolishing slavery 172 years ago, Victor Schœlcher made France great,” Macron declared on May 23 from his Twitter account. “I firmly condemn the acts which, perpetrated yesterday in Martinique, tarnished his memory and that of the Republic.”

The Schœlcher statues were tied with a rope, pulled and ripped down from their bases, smashed with mallets and then stomped on in both the town of Schœlcher and in Martinique’s capital city of Fort-de-France. Videos and photos of the destroyed statues went viral on social media. The statues were torn down on the day when Martinique was commemorating its 172nd anniversary of the abolition of African slavery. Activists were quick to answer those who denounced the violence of tearing down the Schœlcher statues by pointing to how previous peaceful calls by groups like the Mouvement International Pour Les Reparations-Martinique (Martinique’s International Movement for Reparations) for the changing of street names and statues have been ignored.

Though recognized in history books as the leader of the French Empire’s Commission for the Abolition of Slavery, Schœlcher has lately been decried for having authored Article 5 of France’s abolition decree, which allowed former slave owners to be financially compensated for the loss of the people they had enslaved.

In her 2017 book “Reparations for Slavery and the Slave Trade: A Transnational and Comparative History,” Howard University Professor Ana Lucia Araujo notes that, “In its article 5, the law of April 27, 1848, that abolished slavery ordered the National Assembly to establish the amount of financial compensation to be awarded to the old slave owners. Eventually, the law of April 30, 1849, mandated the colonists should receive 12 million francs for the loss of 247,810 slaves in all its colonies, including Réunion Island and Senegal. Half of this amount was to be paid in cash within the thirty days that followed emancipation. ….In Martinique, there were 74,447 slaves, former masters received the amount of 20.25 francs per slave. The French state paid the other six million francs to the colonists in twenty annuities with an interest of 5 percent.”

The LDNA is an independent organization which describes itself as the most popular Black rights movement in the French-speaking world; they say they are fighting against anti-Black, anti-African racism. “We are a collective of young people who are aware of the challenges that need to be taken on for the Black African community,” the organization states on its website.

In a press release posted to their Facebook page on May 23, the LDNA wrote that “It is with joy that we see that it is at the heart of Matinik [creole for Martinique], the place of alienation as in so many other African countries, the place of Black African amnesia, that the movement of the Pan-African Sankarist revolution is taking place.”

In an online interview conducted with this writer, LDNA representatives said they did not order activists to take down the Schœlcher statues, but they applaud the action.

The idea that Victor Schœlcher was a “friend of the Blacks” has to be done away with, they said: “Schœlcher was undeniably against slavery, but when it was necessary to negotiate reparations, he only offered freedom to Blacks and gave financial compensation to the slavers for the loss of the free work of their captives! ….

“For the LDNA, honoring a man who negotiated the abolition of slavery and discounted reparations for 250 years of stolen labor is a terrible ideological sham that must be combated in the name of the imprescriptibility and of crimes against humanity. Martinique commemorates the abolition of slavery on May 22, one month after the date of the decree to abolish slavery in the colonies (which was April 27). Yet the island’s slave population rose up and freed itself between May 21 and 22, 1848. “This type of operation is meant to bring an awareness of the necessity of reparations for the descendants of African slavery who, by their work, allowed the kings of France to build castles like that of Versailles and the Louvre Palace under Louis XIII.”