Leading the charge on how to help artists during the pandemic 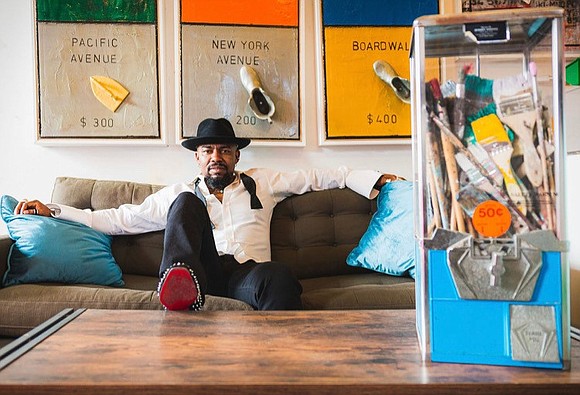 From having a celebrity following that includes Chris Rock to Dorinda Medley of “Real Housewives of New York,” it’s amazing how artist Guy Stanley Philoche maintains his humility. Part of it is due to his journey as a Black immigrant to the U.S. searching for his dream.

When Philoche first emigrated with his parents from Haiti to the U.S., he classified himself as a young, awkward boy trying to find his voice. As a kid, drawing in his room and attending museums made him realize that art was what he wanted to do.

“Art saved my life,” Philoche said. “I owe a debt that I could never pay. If I ever became successful, I would support art and become a benefactor.”

Philoche emphasized that he was not an overnight sensation, but that this was a 20-year culmination of hard work, sacrifice and discipline.

“I moved to New York with a backpack,” Philoche said. “Before Instagram and Facebook, you needed a website and a business card. I went to Chelsea every Thursday, introducing myself to people and inviting them to my studio.”

After finishing a successful art show, he wanted to treat himself by purchasing an expensive watch. COVID started to affect many of the artists’ friends who were laid off, one of which had a baby to raise. Instead of buying the watch, Philoche purchased his friend’s artwork so that the friend could use it to support his family.

“There was a sense of joy, calm and peace I saw in his eyes,” Philoche said. “His wife came and thanked me. After I got home, I went on Instagram live, introduced myself, and made a pledge to buy as much art as possible.”

Ever since then, he promised that every single time he sold a painting, he would buy one to support another artist.

“I just wanted to help my community as much as possible, and I saw that people who shared the same love of art became that for me,” Philoche said. “Whether that’s putting groceries in the fridge, making sure children had pampers and formula––this was my way of helping out. I couldn’t have done this without the help of other collectors.”

Philoche’s message brought an outpouring of messages from emerging artists as well as collectors who wanted to invest their money into this project. It became a life of its own, ultimately leading to artists who never showed their work before to having group shows in the future.

Even during this journey, Philoche has some advice for artists who want to build their brand during the pandemic.

“Act like you are the CEO of your own company,” Philoche said. “I have found that the artists who are most successful use the business part of their brain. This is the time to use your platform, build your website, take pictures of your work and reach out to old collectors.”

His current work is held at Cavalier Gallery in New York. He will participate in Art Crawl Harlem’s art exhibition “Fire & Soul: 100 Years of Harlem,” which will be open from Dec. 3- Jan. 3, 2021. He is also working on an exhibition with Roddy Wildeman at US + U/Warburton Galerie in downtown Yonkers. The exhibition will be open to the public Dec. 12 from 6-9 p.m.