With COVID-19 raging across the country, hard-hit communities in the South Bronx are slowly starting to rebuild 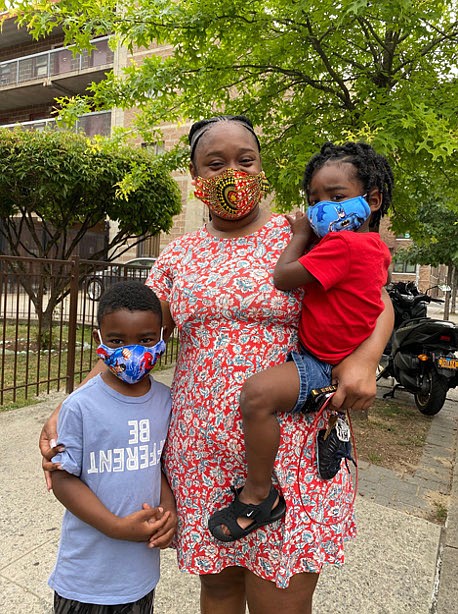 The pandemic has wreaked havoc on these zip codes, which face the highest fatality rates so far. The Garifuna community––an Afro Indigenous ethnic group that was forcibly expelled from their maroon lands in St. Vincent to Central America during the late 18th century––is feeling these intersectional challenges deeply. Among them are dozens of single mothers with children living in homeless shelters in the South Bronx. Across the city, there are hundreds of Garifuna women in shelters.

As the fallout from the pandemic becomes plain, a maze of issues––from jobs to housing to mental health––are complicating recovery for communities like the Garifuna. While some breadwinners are returning to work, many more in fields dominated by undocumented workers, like home health care, have been unable to do so.

New York City is home to one of the largest communities of Garifuna people in the world––an estimated 200,000. During the height of the pandemic, over 80 Garifuna area residents, mostly seniors, died after testing positive for COVID-19.

For Garifuna women who are recent migrants from Honduras, many with undocumented status, COVID-19 has exacerbated a litany of issues that were prevalent in the South Bronx before: rent comprising over 50% of income, lack of affordable child care, and irregular work often in far-flung locations. For women in the homeless shelters, commuting and searching for work have become complicated, as parents––who must sign in and out every time they come home to the facility or leave––are not allowed to leave their children at home, even when supervised or accompanied.

Back in 1998, Mirtha Colón co-founded a community space called Casa Yurumein, together with members of a Hondurans Against AIDS, Inc. Since then, Casa Yurumein has become a powerhouse serving many needs in the community. Recently, it partnered with World Hunger to deliver hot meals to over 600 Garifuna families three times a week––including over a dozen women and their families living inside shelters in the Bronx and Brooklyn.

Colón cites housing costs as the No. 1 barrier facing families seeking employment or returning to previously held jobs. Those who have a child born in the United States can apply for housing under the name of that child; however, they are not entitled to receive any benefits for any other children under their care. Medical benefits are also limited, although programs established by the administration of Mayor Bill de Blasio have expanded health care access for many immigrant families in the city.

The lack of jobs hangs over the heads of Garifuna residents of the South Bronx like an invisible noose.

“I know that it’s very difficult right now to get a job, but…. most people won’t tell you the truth,” said Colón. “We don’t want to be seen as ‘needy’ people, even though we have a lot of needs.”

Nitza, a 25-year-old Garifuna single mother living with her two young boys in a shelter in the South Bronx, is still waiting for the opportunity to return to work as a home health aide in a private home.

The shelters have given her a chance to move forward. When she was 21 and had recently arrived from Honduras, she was able to obtain legal assistance to pursue her permanent residence and, miraculously, obtained her green card in 18 months. She plans to apply for citizenship next year. Despite having to relocate a number of times, Nitza has benefited from psychosocial support and housing supplements during her time in the shelter system. But, since the pandemic, her time frame for moving out of the shelter and getting her own apartment has become uncertain.

When the pressure from the pandemic clears, she plans to pursue a certification so that she can work in the school system with young children, helping to get them on and off the school buses. The work is part-time, and the pay is similar to that of a home health aide––around $15 an hour. But this line of work provides another opportunity. Having obtained her high school diploma back in Honduras, Nitza has always dreamed of working with the school system and she hopes to one day become a teacher. She also plans to pursue her citizenship as soon as she can.

Nitza is bright, dressed in a brightly-colored headwrap, alert, and attentive to her two small boys. But a sunny demeanor often belies the mental health challenges housing insecure women face.

“Your mind is busy thinking how to deal with everyday living,” notes Mirtha Colón “it’s very difficult to take advantage of the opportunities...how am I going to feed my kids and then depression comes along...sometimes that blocking mind comes to substance abuse. I’m not talking about heavy drugs, but I’m talking about alcoholism...Are you going to have a mind to go to school?”

Colón adds that, for many, it is difficult to grasp the possibilities for the future. “What are you expecting from a shelter? It’s transitory housing,” she said. “But if they have no other way, they see it as permanent housing.”

Casa Yurumein’s network of Garifuna community leaders and artists are holding virtual art workshops in an attempt to hold the attention of families, who, they say, continue to congregate in the parks as if the pandemic presents no risks. The virtual gatherings have created a window to reach younger members of the community at home who, in turn, can motivate their parents.

“The intention behind this is to look for a better future and probably by working on this, can they see a better environment,” said Colón, who migrated to the city over 30 years ago and maintains constant contact with her native Honduras.

The Garinagu (Garifuna people) display a resilient spirit that has helped them to survive, no matter where they go. Nevertheless, according to health workers, COVID-19 has had an adverse psychosocial impact on Garinagu both in the South Bronx as well as in Honduras, where extreme poverty, racial discrimination and cultural exclusion and land displacement persist.

Despite the desperation that is felt across borders, the Garifuna community’s resilience, strong bonds and goodwill may help many still struggling in the Bronx regain their sense of place, dignity, and home.