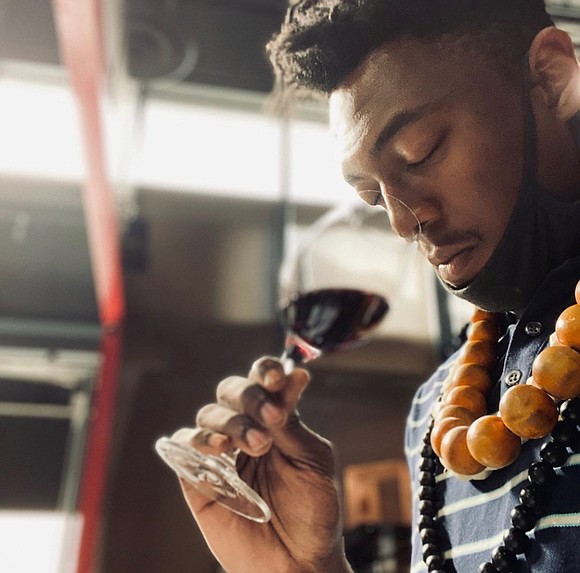 Known around Harlem as the self- proclaimed “wine god,” Mozel Watson is a certified sommelier who educates Black people on wine––what they’re made from, the different ways they’re made and what the people are putting into their bodies as opposed to drinking and being uninformed.

“I target us just to educate us on what we’re putting in our body,” says Watson. “Being a Black person, diabetes is something we die from and drinking all of these sugary, sweet drinks just increases that. You don’t have to drink something just because a rapper had it or because it’s popular, you just have to know what you’re putting in your body,” he states pertaining to wines like Moscato, which, when cheaply made, is infused with an unhealthy amount of sugar. “I sell to everyone but my purpose is to educate our people, the Black community, because we don’t know what we’re drinking. We’re trendsetters but we follow a lot in the liquor industry. The classic example is Hennessy. Too many of us drink Hennessy not knowing that Hennessy doesn’t even make the cognac. They buy old grapes, slap a label on it and say, ‘Hey, here’s the product.”

The 32 year old has been an entrepreneur in the business for 16 years, falling in love with it around the tender age of 17. He started out working as a stock guy at a wine shop called “67 Wine and Spirits” for four years. It’s when he got promoted to the shipping department that he started to read and study about wine. The knowledge he acquired from “Windows on the World” by Kevin Zraly, an in-depth book on wine, completely engulfed him into the wine culture.

“One thing I like about this is that you could never truly understand everything about wine, it’s always something new, like math,” says Watson. “That challenge made me want to keep learning.” This newfound knowledge led him to become a sales representative, then manager at a few shops. “I didn’t plan to stick with it this long, it just sort of happened that way.”

Watson opened up his first wine shop in 2015 on 420 Lenox Avenue in Harlem; it was called “Pompette.” It was not unusual to enter the shop and enjoy wine tastings with hip hop playing in the background. Before the COVID-19 pandemic, Watson would invite winemakers into his shop during wine tastings to teach about the process of wine making with everyone engaging in conversation about this. “This I call the wine church service and myself, the wine god.” He is currently doing at-home subscription services so that he can reach people all over the country. He sends them tasty notes, food recommendations, wine openers, wine tote bags. The customer also has the freedom to try out tailored wines that they’d love to taste to further help them understand and get a sense of what they’re drinking.

In addition to the business’s success, Watson is opening up a bigger wine shop in Harlem, “Apricots and Honey,” while still consulting for 3 shops in the city. The people of Harlem know to go to him whenever they need guidance or advice in this area also due to his research traveling to countries such as Spain, France and Portugal on vineyard tours.

Being a Black man in the wine industry has come with its fair share of passive aggressiveness from others in the business who do not expect Black Americans to be educated in this area. “You know when someone’s looking at you. I’d look up and people would be staring. They don’t expect us to do this, they don’t expect us to have this knowledge or even the wine talk,” he says. He recalls a moment in Spain while touring vineyards when a woman came up to him and asked, “What team do you play for?” Watson states: “What we’re represented on TV is based on this. They’re shocked a Black American would know so much.” The passive aggressiveness is even experienced while he tries to help customers where a co-worker may interrupt him helping someone and suggest they know better how to cater to the customer.

Watson stands by how beautiful the wine industry is and recommends that more Black people get into it. “You could travel the world for free and meet new people.” You can come in as yourself and there’s nothing better than a Black person who just naturally has swag and is just being themselves.”