Tyler Gordon: the 14-year-old whose talent knows no bounds 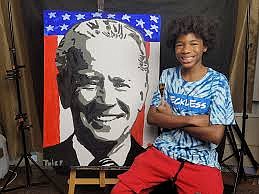 Tyler Gordon, a 14-year-old visual artist, is gaining public recognition and making himself known in the art world.

In November 2020, Gordon gained attention when he painted Vice President Kamala Harris. He posted on his Twitter asking his followers to retweet and tag the vice president, so she could see his portrait of her.

“I am overwhelmed with just the magnificence of your artistry,” Vice President Kamala Harris says in the video.

Since his talk with Kamala Harris, Gordon has painted portraits of Janet Jackson, Kobe Bryant, Martin Luther King Jr., Michael Jackson and so many other celebrities. He has recently paid homage to Cicely Tyson, who passed away Jan. 31, and Amanda Gorman, the youngest inaugural poet and first to perform at the Superbowl.

In one of his Twitter posts with the portrait he painted of Amanda Gorman, Gordon thanks her for being such an inspiration not only for him, but for those that have speech impediments.

Gordon is partially deaf and has a stutter, but that isn’t stopping him from showing the world who he is and the talent that he continues to shock the world with. This past December, Gordon’s painting of LeBron James was on the cover of TIME magazine; James was awarded with the Athlete of the Year.

In an interview with ABC News, Gordon explained why art is so important to him. He uses his talent as a source to express himself.

“Art is important to me because it helps me speak without talking, and it helps me express what I’m feeling onto the canvas,” Gordon said.

Gordon’s art changes as the state of the world changes and he will continue to inspire little boys and girls just like him to keep dreaming and make their wishes come true.

“My dream is just to inspire other people to use their talent to change the world,” Gordon said in an interview with CBS News.