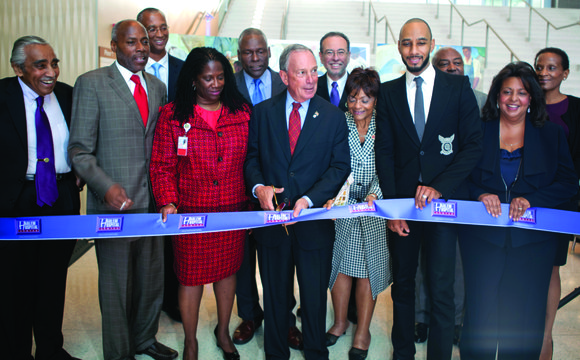 This stunning $325 million facility is one of the largest major public hospital modernization projects in the city's history, employing 220 residents from the Harlem community, the highest number of Harlemites employed on a single project in the city.

The Mural Pavilion also houses a number of suites, which will serve the hospital's 232,353 annual outpatients, including the Bariatric Center of Excellence and women's imaging department. The pavilion will also house the new adult and pediatric emergency departments and the hospital's level 1 trauma center, which will be fully completed in 2013.

The Mural Pavilion, in addition to delivering world-class care to the community, also pays tribute to Harlem's great artistic history in a special public art galley space showcasing the hospital's historic Works Progress Administration's Federal Art Project (WPA) murals, which were commissioned in 1936 by the WPA, established by President Franklin D. Roosevelt to provide work for artists during the Great Depression. Harlem Hospital Center was the first WPA commission for Black artists in the country and featured work from such African-American artistic masters as Charles Alston, Vertis Hayes, Georgette Seabrooke, Selma Day, Sara Murrell, Elba Lightfoot and their assistants Jacob Lawrence, Morgan Smith, Louis Vaughn and Beauford Delaney, among others.

"Today's ribbon-cutting celebrates a commitment this administration made to the Harlem community," said Gibbs. "As one of the largest public hospital modernization projects in our city's history, this pavilion will provide top-notch care, right in the heart of the community, to many of the new Yorkers who need it most."

Kasseem "Swizz Beatz" Dean will serve as the Global Ambassador for HHC. "I can honestly say tonight represents something bigger than a Grammy, bigger than selling millions of records, bigger than my wildest musical dreams," said the rapper-turned-Renaissance man in his keynote address at a celebratory dinner given later that evening.

"When I go home tonight, I'm going to write in my journal today's date because it marks history," Dean went on to say, officially accepting his role as the first Global Ambassador for New York City's public hospitals system.

The evening's festivities not only celebrated the new state-of-the-art facility and its gallery of stunning murals, but also paid tribute to 93-year-old Dr. John W. V. Cordice, who was one of the surgeons who saved the life of Dr. Martin Luther King Jr. after a near-fatal stabbing during a book signing in Harlem on Sept. 20, 1958, nearly 54 years ago.

"If it wasn't for him, we wouldn't have had the 'I Have a Dream' speech in our life," Dean noted, before going on to relish in another one of Cordice's successes--his 60-plus-year marriage.

"To see him and his lovely wife going strong for 60-something-plus years with not a care in the world, but the most care in the world, was a wake-up call for me tonight to understand that love does exist. People that care do exist," said Dean.