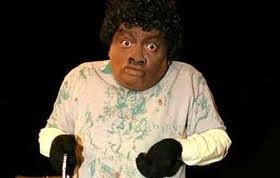 This past Aug. 26, Peru’s government announced that it is penalizing Frecuencia Latina, the television channel that broadcasts skits with the controversial character “El Negro Mama,” some $27,000 for failure to properly apologize to the Afro-Peruvian community for denigrating depictions of Blacks in Peru.

The El Negro Mama character, portrayed by comedian Jorge Benavides on the weekly program “El Especial del Humor” (“The Humor Special”), depicts the average Afro-Peruvian as a delinquent and cannibal. Complete with Blackface and an Afro wig, Benavides’s Negro Mama is usually seen muttering, walking in a hunched-back position and wearing gorilla costume hands. Negro Mama is portrayed in various scenarios and known to repeat the phrase, “Soy Negrito, pero tengo mi cerebrito” (“I am Black but I have my little brain”).

Since 2010, the activist group LUNDU (the Center for Afro-Peruvian Studies and Promotion) has led a campaign to halt broadcasts of the racist El Negro Mama caricature. Their campaign led to a Nov. 29, 2010, official order from Peru’s Court of Ethics of the National Society of Radio and Television, which required Frecuencia Latina to issue an apology to Afro-Peruvians because it had allowed the Negro Mama character to be so degrading.

But the Frecuencia Latina apology—which the channel issued in December of 2010—was seen as equally demeaning.

“It was dismissive,” notes LUNDU founder Mónica Carrillo in an exclusive interview. “They said, ‘Well, if anyone felt offended—sorry.’”

In 2010, the directors of Frecuencia Latina stated through their attorney that they believed El Negro Mama was not offensive but that the character may have been in some distasteful skits. After reading the channel’s apology two separate times on air, the station’s anchor, Mónica Delta, said that the problem with the ruling against Frecuencia Latina is that it is not truly a valid attempt to fight racism. Delta hinted that LUNDU’s attacks on “El Negro Mama” are really an effort at censoring freedom of expression, because—she contended—there was obviously nothing wrong with the humor in the caricature.

Frecuencia Latina’s attorney, Jose Ugaz, also complained that to take El Negro Mama off the air would be censorship. “It is a humoristic and artistic creation,” Ugaz stated during a 2010 interview with Peru’s leading newspaper, El Comercio. He added, “There has to be some tolerance and some understanding that this is not meant to denigrate one particular social group, it’s simply meant as a joke.”

But LUNDU still did not find the humor in El Negro Mama, and the group petitioned the Court of Ethics of the National Society of Radio and Television to issue further restraints against the Frecuencia Latina television channel because it’s formal apology was not sincere. This year, the Tribunal has finally agreed with LUNDU.

“If a media organization fails to follow-through on a ruling issued by the Tribunal—which was created by the media itself—it proves that their self-regulatory system is not working and that we need stronger media laws with designated rules and limits,” said Carrillo said in a press release following the announced Aug. 26 fine against Frecuencia Latina. “It’s time to design a media law that will allow for the effective regulation of racism and other forms of discrimination, particularly the blatant discrimination against sexual diversity. And it’s time for the media to understand that freedom of the press does not mean license to offend and discriminate.”