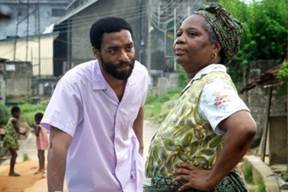 Half of a Yellow Sun movie

Apr. 28 (GIN) – A new film based on the highly-praised novel by Nigerian author Chimamanda Ngozi Adichi has run into “regulatory issues” from Nigerian censors who have delayed its release.

Half of a Yellow Sun was set to open in Nigerian cinemas this week and in the U.S. this month.

A spokesman for the Nigerian Film and Video Censors Board denied that the film which looks at the 1967-70 war on Biafra was “officially banned” but that it was being “reviewed for release.”

The delay prompted the film’s director, Biyi Bandele, to question why the film board pulled the film now after having first seen it seven months ago. "What's frustrating is we have not received a formal letter from the board telling us we've been banned, or that we've not been banned," he added.

Bandele said he did not see how the film could incite violence but acknowledged it would raise issues which Nigeria badly needed to discuss. “Nigeria is more divided than when the war started, he said, because “we have refused to talk about the elephant in the room."

The screen adaptation of Adichie's novel tells of two sisters caught up in the war, when the southeast tried to form an independent nation called Biafra. Nigeria planned to defeat the movement with a "quick, surgical police action" that would last 48 hours but it lasted more than two years and cost more than a million lives.

Highly sophisticated weaponry supplied by the British to the Nigerian military helped defeat the insurgents.

“The Labor Government of Harold Wilson argued it was more merciful in the long run to let Biafrans starve and be bombed into submission than to remain neutral; that the alternative was a tribal "Balkanization" of all Africa, and that the Igbo leaders were exaggerating and prolonging the misery of their people in order to nationalize and abscond with the oil and consolidate their own leadership,” wrote Renata Adler in “Letter from Biafra.”

Writing on the website Bella Naija, “Emerie” expressed her frustration.” Let’s see the movie already. We already know it is based on a touchy theme. #Nigeria-Biafra civil war. But we must tell our stories.

Another disgruntled fan “Ojie” followed up: “I do not get this whole “touchy” subject. Can the Biafran war ever be more “touchy” than the Holocaust? or what the African American went through? Yes, there have been tons and tons of films based on these things. It’s our History. We have a right to know about it and have discourse. Other countries embrace their history, why shouldn’t Nigeria? Why is Nigeria always her own enemy? Why?”