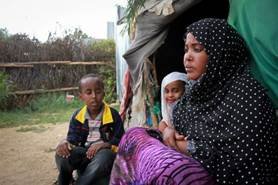 Apr. 18 (GIN) – The mother of the 14 year old boy who risked death to stow away in the wheel well of a plane bound for Hawaii wept upon learning of his life-threatening adventure.

Ubah Mohamed Abdullahi, who lives in a refugee camp in Ethiopia, says it was the first news she had heard about her lost son for six years.

Divorced from his father, she has not been in contact with the family since they moved to the US in 2008. The boy's father said the 16-year-old had been trying to return to Somalia.

The boy, Yahya Abdi, survived lack of oxygen and freezing temperatures on a five-hour flight from California to Hawaii.

According to the young man’s father, Yahya Abdi was "always talking about going back to Africa" and since the family came to the US, the boy had been bothered by "education problems".

Since 1991 Somalia has seen clan-based warlords, rival politicians and Islamist militants battle for control - a situation that has allowed lawlessness and piracy to flourish.

The years of anarchy and drought have forced many Somalis to seek sanctuary elsewhere but since a UN-backed government was installed in 2012, a small measure of stability has returned to some areas of the country.

BBC Somali's Abdifitah Ibrahim Cagayare says in the middle of the interview Ms Abdullahi broke down and sobbed uncontrollably.

She said that since her two sons and daughter went to the US in 2008 with her ex-husband she had been desperately trying to get in touch with them.

"We are divorced… I called him [her ex-husband] several times through his relatives and he refused to talk to me," she said.

"I want to hear the voice of my children, I want to see them, please help me and guide me to that, please," the mother wept.

Somalis began seeking refuge in Ethiopia in 2011 during a crippling famine that killed an estimated 260,000 people, half of them under the age of 6. Many international aid activists believe that tens of thousands of people died needlessly because outside nations were slow to respond to early signs of approaching hunger in East Africa in late 2010 and early 2011.

Shedder Refugee Camp, in far eastern Ethiopia near the border with Somalia, is home to Yahya Abdi’s mother and some 10,300 Somalis who fled their country because of a deadly power struggle in which African, U.S. and other regions have been taking part. Most Somalis here are from minority groups who face persecution.

According to the latest reports, efforts are now underway to reunite Yahya Abdi with his mother in the U.S. The U.N. refugee agency says she might qualify to immigrate to America, and could possibly move to the U.S. in less than a year.