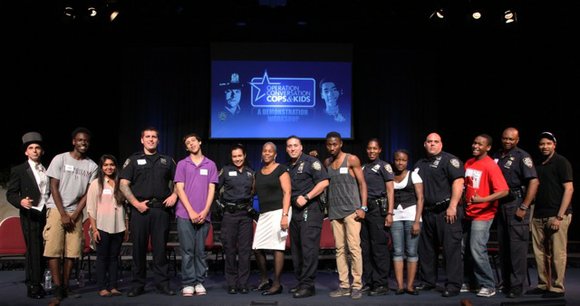 Program founder Dr. Lenora Fulani and 12 "cops and kids" demonstrate the workshop for audience of 850 police and community.

All Stars Project co-founder Dr. Lenora B. Fulani directed a performance ensemble of six NYPD officers and six inner-city young people at the “Operation Conversation: Cops and Kids” demonstration workshop for an audience of more than 600 graduating officers and 600 community members at the Apollo Theater.

NYPD Commissioner William Bratton joined more than 600 members of the graduating class of the New York City Police Academy in observing performances of relationship-building skits and conversations between young people and police officers, the fifth such event since July 2012.

Operation Conversation: Cops and Kids is a partnership program of the NYPD and the nonprofit All Stars Project designed to foster positive interactions between the police and inner-city young people. It features workshops that use performance, improvisation and conversation to help teenagers and police officers build respect and develop and improve their relationship.

The program was created by developmental psychologist Fulani, who has led 94 workshops with 992 police officers and 1,251 young people in community and Police Athletic League centers, churches and schools since December 2006.

“In my opinion, the two hardest things to be in this city, especially when police-community tensions are high as they are now, are being a police officer and being a Black and Latino teenager,” said Fulani. “The impact of the workshop is to help them create performances together … That might be useful in the middle of a tense situation one day.”

Said Bratton, “The NYPD is proud to work with the All Stars Project in continuing this worthwhile endeavor to build trust and respectful alliances with our youth.”