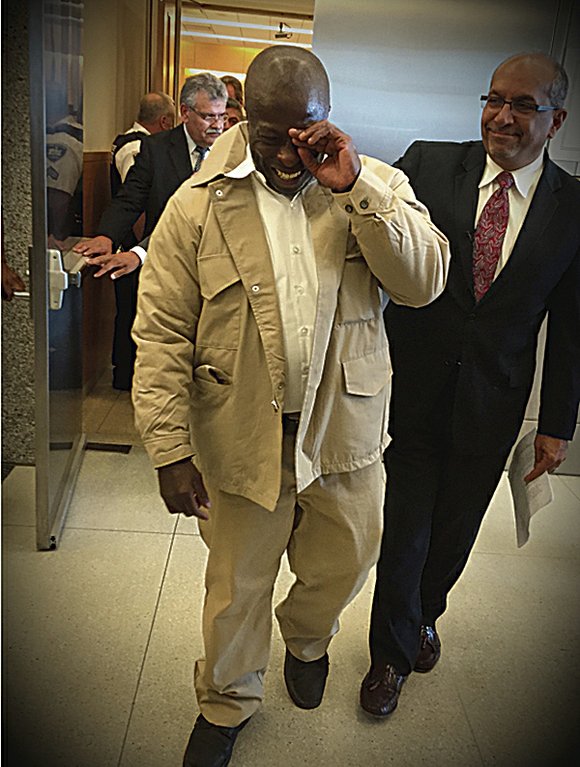 Last week, Thompson announced that he will move to vacate murder and other charges against David McCallum and the late Willie Stuckey, both of whom were convicted in the 1985 kidnapping and murder of Nathan Blenner.

“In the interest of justice, I will ask the court today to vacate the murder convictions of David McCallum and Willie Stuckey,” said Thompson in a statement. “After a thorough and fair review of the case by my Conviction Review Unit and the Independent Review Panel, I have concluded that their convictions should not stand and that Mr. McCallum should be released from prison.”

The decision follows a review of the case by the district attorney’s Conviction Review Unit.

Nathan Blenner, 20, was kidnapped Oct. 20, 1985, in front of his home in South Ozone Park, Queens. His body was found the next day in an undeveloped lot next to Aberdeen Park in Bushwick, Brooklyn. He was shot once in the head. McCallum and Stuckey (who has since died) were only 16 years old when they were charged with the kidnapping and murder of Blenner. They were then arrested and eventually confessed to the crime.

McCallum and Stuckey were convicted of second-degree murder, first-degree kidnapping, first-degree robbery and second-degree criminal possession of a weapon after a jury trial, Oct. 27, 1986. They were both sentenced to the maximum of 25 years to life in prison.

After an examination of the facts and circumstances of the case against McCallum and Stuckey—the verdict against whom was based entirely on their confessions—the convictions cannot be sustained. The CRU investigation concluded that the confessions were false and not supported by physical or testimonial evidence.

McCallum was pleased with finally being exonerated but a little ambivalent about the overall experience.

“My first thought was simply that there was a lot of work put into the case and just to know that it was coming to an end was an absolute relief,” said McCallum to the AmNews. “I’m also absolutely bitter because he (Stuckey) was arrested with me and he’s not here. We grew up together in Bushwick, and we hung out together. We both knew that we never did the crime and he died in prison. It’s difficult for me to accept.”

According to the Brooklyn DA’s office, the investigation concluded that the jury’s fact-finding ability in regard to both defendants was “significantly corrupted” and finds “clear reasonable doubt” as to the truth and accuracy of the confessions, which were the sole bases of the defendants’ convictions.

Before Ken Thompson took office this year, McCallum and his legal team were getting push-back from Charles Hynes’ office and felt that his office was obstructing the process. “We weren’t confident that we would get this case to see the light of day,”McCallum said. “We thought if Thompson were able to win the election, it would give us the opportunity to have a fair investigation. This guy really needs to win. This is the only chance we had.”

And McCallum got that chance.