In loving memory of Elombe Brath, our ambassador to the African world 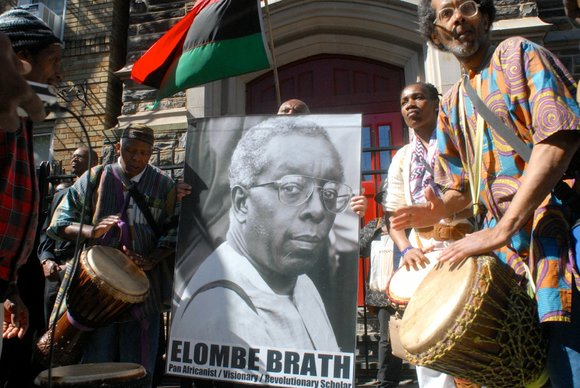 March to honor Elombe Brath in Harlem on May 31, 2014 Photo by Bill Moore

In the course of a beautiful sunny Saturday morning on May 31 at 9 a.m., the global African community, led by the December 12th Movement, marched from the Harlem State Building to the world-renowned Abyssinian Baptist Church in loving memory of our ambassador to the African world, the honorable Elombe Brath.

At Abyssinian Baptist Church, the illustrious Rev. Dr. Calvin O. Butts III officiated Brath’s home-going. In keeping with our African spiritual heritage and reality, the home-going did not mourn the passing of Brath, but celebrated his extraordinary life, encyclopedic mind, masterful ambassadorship and supernumerary contribution to the worldwide African struggle for freedom, sovereignty and power.

As the chairman of the Patrice Lumumba Coalition, co-founder of the December 12th Movement and Black America’s ambassador to the African world, Brath advocated for countless freedom struggles and revolutionary movements in Africa by being a strong supporter of the Mozambique Liberation Front, the Popular Movement for the Liberation of Angola, the Zimbabwe African National Union, the African National Congress in South Africa and the South West Africa People’s Organization (SWAPO) in Namibia.

In his heartfelt obituary for Brath, award-winning journalist and historian Herb Boyd said, “Elombe joined the South West African Relief Committee to assist SWAPO President Sam Nujoma in getting aid to the country of Namibia, which was then suffering under the yoke of the racist apartheid regime. This marked the beginning of his numerous relationships with freedom fighters, struggling to liberate their countries from colonial and white minority rule. They included leaders such as Samora Machel of Mozambique, Thomas Sankara of Burkina-Faso, Kanyama Chiume of Malawi and Robert Mugabe of Zimbabwe. In 1973, he was awarded the Croix de Chivalry by President Ahmed Sekou Toure of Guinea for continuous work toward the African Democratic Revolution.”

To that degree, Brath is nonpareil when it comes to his devotion to the Pan-African revolutionary movement along with the study and teaching of the economic reality and sociopolitical development of Africa. Simply put, like Malcolm X, Brath’s life was consecrated to African uplift, sovereignty and power at home and abroad. Therefore, it must be noted that Brath, along with historian Vincent Gordon Harding and novelist Sam Greenlee, transitioned to the ancestral realm on May 19, the birthday of our shining Black prince, Malcolm X.

Reggie Mabry, Pan-African strategist and Sons of Africa associate, said, “Of all the transitions that occurred recently, Elombe’s is the biggest and most significant because he was our direct connection to the revolutionary movements that were happening around the world. He stood alone as our ambassador to Africa, especially in understanding and engaging the worldwide Pan-African revolutionary movement. Thus, his understanding and involvement must be duplicated by every African at home and abroad.”

Similarly, Brath’s sons, Mgavi Elombe and Cinque Brath, along with his sister, Amber Lyons, shared their reflections and acknowledgments of not only an influential Pan-African activist and ambassador, but a loving father and brother. In eulogizing Brath, Butts praised highly his work, commitment and love to the global African community. Thus, in loving memory of Brath, his ambassadorship to the African world will be missed but not forgotten.