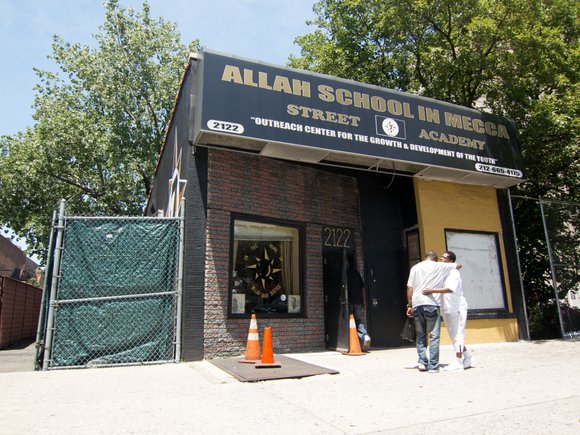 Members of the Five Percenters, aka Nation of Gods and Earths (NGE), merged in Mecca/Harlem this past weekend for their 44th annual Show and Prove. Ever since 1971, during the second weekend of each June, the organization, established by Allah, the Father, commemorates the anniversary of his assassination.

Throughout the three-day event at the Allah School in Mecca (2122 Adam Clayton Powell Jr. Blvd.), fond memories were shared about the group’s formative years since its 1964 inception. NGE elder Abu Shahid, who soldiered with Brother Clarence 13X (as Allah was then known) at the Nation of Islam’s Temple No. 7 during the early 1960s, recalled them attending classes conducted by Minister Malcolm X. He also reflected on the life of the first female Five Percenter, Sister Carmen, who returned to the essence back in February.

Eye God and Raheem, two of the brothers who the media demonized as the “Blood Brothers,” mentioned how they were inspired by witnessing Malcolm X speak and were already teaching civilization in the Harlem community prior to the teens aligning with the Father in early 1964. They also explained how the police framed them in the highly politicized “Harlem Six” case.

“We used to see Malcolm X at Temple No. 7 and later the Hotel Teresa,” remembered Raheem. “The Father used to come through our block [129th Street and Seventh Avenue] when he was selling Muhammad Speaks [newspapers].”

Some reminisced about Allah’s righthand man, Justice Free Cipher Akbar, who returned to the essence in 1976. They recalled him regularly escorting local youths to the Apollo Theater, as well as his guidance of the nation in Allah’s physical absence while Allah was detained at Mattawan Hospital and after his assassination in the elevator of 21 W. 112th St. at Martin Luther King Jr. Towers on the morning of Friday, June 13, 1969. Although an arrest was initially made, his murder remains unsolved.

Allah instructed the youth to deal with each other in equality, structuring the NGE without a hierarchy. In 1968, he began preparing them for a future without his physical presence.

“He would tell us, ‘After I’m gone, when I’m not here anymore, if you want to see me, continue teaching and come together,’” revealed Akmin Allah, who was taught by the Father. “And I’d tell him to stop saying that because everything else he predicted was coming true, and I figured that would too. He said his job was done, and it was our turn to show and prove that we are the Gods!”

In the wise words of Allah, the Father himself: “Protect the child. Show him where. If he doesn’t do right, he is going to jail. Just like Muslims, I’m not against anyone, but they are really teaching their children not to smoke, drink ... I don’t teach the child not to smoke. I teach him to get the understanding. Of what? Of it! The wealth of a country is in the children, not the money! And if you don’t keep the young people strong, how are you going to win?”

The NGE acknowledges their 50th anniversary this Oct. 10. To support the campaign to co-name 126th Street and Seventh Avenue “Allah, the Father’s Way,” send a message to allahsign@gmail.com or P.O. Box 1295, New York, NY 10027.