Drive to bring Mumia home continues as he celebrates 60th 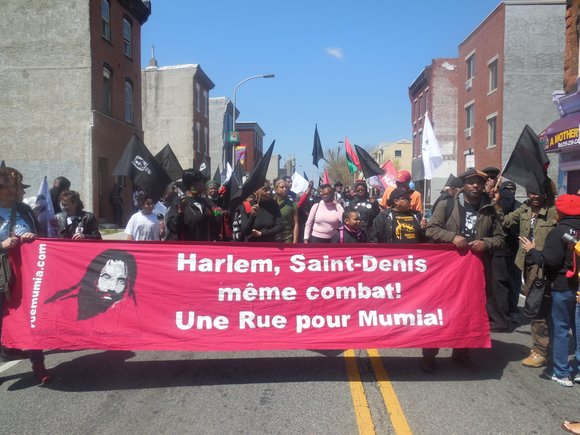 Beginning Thursday evening at Harlem’s Riverside Church, Dead Prez’s M1 played master of ceremonies, introducing numerous revolutionary artists who expressed their support for the “voice of the voiceless.” In addition, a prerecorded message from Abu-Jamal was played as he advocated to free all political prisoners.

“With love, I send you my thanks for fighting for me, and fighting with me, to join this great big fight for freedom. I want to ask you one question, and I want you to take it seriously … If not for all of you, all of us, would I still be alive?”

The audience responded: “No.”

At the evening’s conclusion, M1 made a case for why Abu-Jamal deserves a new legal review, prior to advocating to “free Mumia and all political prisoners!”

Then on Saturday morning, a contingent of several hundred activists convened at the former headquarters of the Black Panther Party’s Philadelphia chapter, located on the corner of 19th Street and Cecil B. Moore Street, where a 14-years-young Abu-Jamal began his journey as the organization’s minister of information.

Supporters spoke about what the necessary steps are to present evidence in a court of law, which they say was previously suppressed by prosecutors, and will hopefully help earn Mumia’s emancipation from prison.

Some suggested Philadelphia District Attorney Seth Williams should be investigating the Fraternal Order of Police for evidence tampering, witness intimidation and coercion and extortion of politicians.

Their optimism surged after his death sentence was commuted to life in prison without possibility of parole in December 2011 due to erroneous jury instructions given by prosecutors. He was placed in the general prison population the following month.

Many now dare to envision what was once believed to be an unimaginable dream—that Abu-Jamal may actually be physically freed from the confines of the Pennsylvania concentration camps.

“From his prison cell, he has been able to awaken masses of people all over the world,” determined Sister Taina Asili, a cultural worker with the New York State Prison Injustice Network. “Mumia, after over 30 years, has not stopped speaking truth to power … and we will not stop either. We will keep this going, not just today, but until Mumia is free!”

Then a local Harlemite spoke.

“Many of the people who are incarcerated are innocent … I didn’t realize that until they incarcerated my son,” warned Sharon Salam, mother of Yusuf Salam, who was exonerated in the Central Park jogger case. “Then I said, ‘Wow, he can’t be the only one!’ It’s very difficult for us to get out of jail because the system does not work for us.”

Baruch professor of history Johanna Fernandez added: “We have descended on Philadelphia to fulfill the moral assignment of our generation … to free political prisoners, end mass incarceration and to tell this society that we want a society that’s built on human interest, not on greed and profit. In the process of bringing Mumia home, we will be transforming our society and building a new world.”

They then began chanting, “Brick by brick, wall by wall, we will free Mumia Abu-Jamal!” as they began the Sons and Daughters of the Revolution march to the Church of the Advocate, located at 18th Street and Diamond Street.