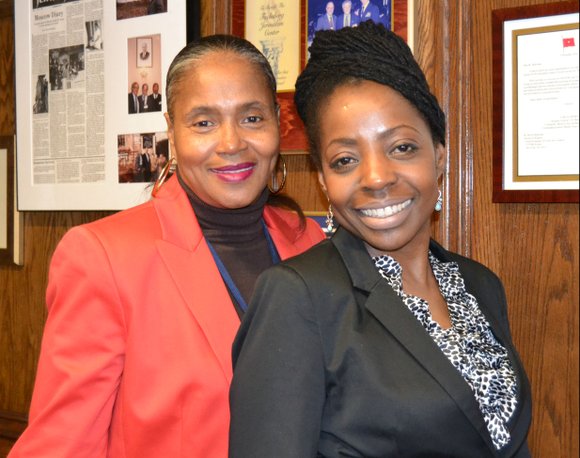 Johnson, a graduate student at Touro, is working on completing her second master’s degree. Her father was born in the West Indies and immigrated to the United States seeking a better life for himself and his family. One of five children, Johnson said her parents focused heavily on the importance of education. This was the driving force behind Johnson’s advocacy in Albany.

“I am a product of what many immigrants come to this country [seeking] ... a better life through opportunity,” said Johnson. “I went to Albany in support of the Dream Act because financial aid played a major role in my pursuit of higher education. When children are denied financial assistance, it hinders growth for us all.”

According to Touro, the New York State Dream Act “would give undocumented students access to state financial aid, 529 college savings programs and other private loans programs. It establishes a Dream Fund Commission to raise private funds for a college scholarship program for the children of immigrants.” Additionally, “about 146,000 youth in New York educated in New York public schools are ineligible for financial aid. Of the more than 4,500 undocumented students who graduate from New York schools each year, only 5 percent to 10 percent pursue higher education due to financial obstacles.”

Johnson’s work and advocacy are steps in a long journey of helping these students reach their dreams and discover their full potential. According to Johnson, “The trip was beneficial for social workers, and those completing their MSW studies to voice their opinions regarding the Dream Act. The professors at Touro College have been very instrumental in not only teaching me advocacy for clients, but incorporation tools about how public policies play such a role in the future of this country.”

Davis, also a graduate student, traveled to Albany to advocate for loan forgiveness. Davis is a former substance abuser who has been able to turn her life around for the better, and she is now obtaining her master’s in social work after receiving two undergraduate degrees from Touro. She now gives back by helping people through substance abuse recovery.

After she completes her education, Davis will be $100,000 in debt and the loan forgiveness program would reduce this amount to $74,000. According to Davis, there are already loan forgiveness programs for doctors, lawyers and nurses, and with the increasing need for social workers, more funds should be designated toward their line of work. She stated, “As much as social workers are needed, it is not a field you go into to make a lot of money ... For me personally, and I’m sure for all social workers, it is something that we struggle with.”

According to Davis, the overall trip “was phenomenal and a big success.” Both Johnson and Davis hope that their advocacy will make a difference in both the fight for loan forgiveness and the Dream Act.