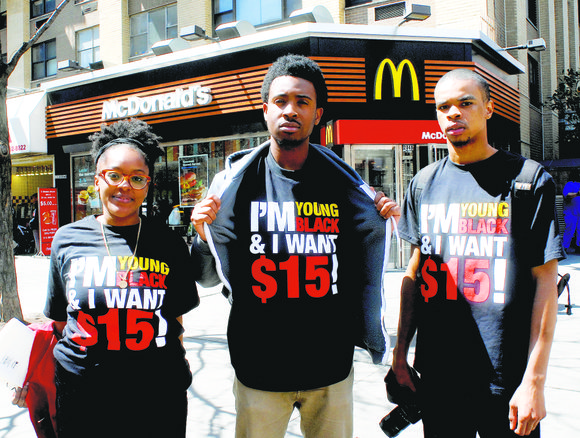 New Yorkers led the way and now the rest of the country is following suit.

This week it was announced that workers in nearly 30 cities would convene the first ever “People’s Wage Boards” to examine how low wages hold back neighborhoods and communities from thriving. Community members, frustrated with having to depend on government assistance and having unpaid bills, will pattern their panels on the New York State Wage Board, which eventually advocated raising the minimum wage for fast-food workers to $15 an hour.

Workers will deliver personal testimonies on why they need a raise and their right to organize. Workers will testify in front of wage boards in places such as Denver, Phoenix, Atlanta, New Orleans, Detroit, Kansas City, Mo., St. Louis, Las Vegas, Philadelphia, Pittsburgh, Houston and Milwaukee.

“I used to think that if I kept working hard at Wendy’s and put in the hours, I’d eventually scrounge enough that the sight of my monthly electricity bill didn’t cause me to panic,” said Tara Blair, who will testify in front of the Wage Board in Memphis, Tenn., in a statement. Blair makes $7.50 an hour at Wendy’s.

“But I know now it takes workers joining together—as they did in New York—who will actually make the difference,” continued Blair. “That’s why I’ll be standing up in front of the Wage Board to describe some of my most personal moments—like being kicked out of apartments because I can’t pay rent. It’s not easy for me to share these stories, but Memphis has to realize there are too many people living just like me, and we’re not going to take it anymore.”

Local leaders in each region, from state senators to clergymen to members of academia, have volunteered to sit on the wage boards. In Raleigh, N.C., state Rep. Yvonne Holley, the Rev. Curtis Gatewood and local business owner Vimala Rajendran will sit on the Wage Board.

Earlier this year, after a slew of public hearings, New York Gov. Andrew Cuomo announced he would adopt the $15 minimum wage recommendation set by the Wage Board. During the hearings, workers testified about living in crowded apartments to make rent, deciding between food, clothes or school supplies for kids and having to rely on public assistance to feed their families. Los Angeles also raised its minimum wage to $15 an hour, following similar moves by cities such as San Francisco and Seattle. There are also $15 minimum wage proposals pending in Portland, Maine, Tacoma, Wash., Sacramento, Calif., and Washington, D.C.

“The workers’ testimonies in New York revealed the insensitivity of politicians and society as a whole to make sure that people who work hard are able to take care of their families,” said Louisiana Rep. Joseph Bouie Jr., who will sit in on New Orleans’ Wage Board panel. “It’s imperative that in New Orleans, we listen to the voices of our workers, too.”