One amazing time at FlameCon 2 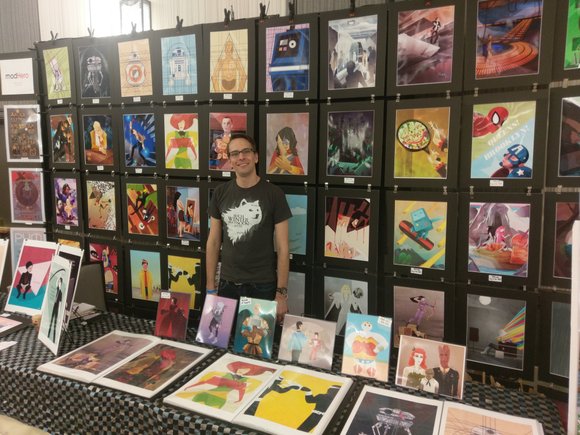 As we made our pilgrimage to Brooklyn, it was a rough start when the skies randomly decided to unleash a downpour on us.

However, that would not be enough to stop con goers from experiencing the amazement that FlameCon 2 had to offer, featuring a wide assortment of content centered around an LGBTQ theme in this world of Geekdom. Many artists, writers and creators of all backgrounds came out in support of their community and to spread their love for the things that bring us together whether it be comics, artwork or movies and more.

On entering the event space, I was greeted by many excited con goers, many of whom were clad in vibrant costumes of the characters they love from comic books, movies and cartoons. The opening ceremony started off with a very humorous reading of a piece a fan fiction featuring none other than Harry Potter characters Ron Weasely, Harry Potter, Draco Malfoy and a Mercedes-Benz. The ceremony was then closed by a fun performance featuring Wild Women of Planet Wongo, who in fact will be doing a weekly show at Parkside Lounge in the Lower East Side starting in September. I would highly recommend checking it out, especially for those looking for a zany night out. For tickets and more information visit planetwongo.com.

Walking around the exhibitor’s hall, I visited various tables where vendors and artists were selling their products and creations. I had to control myself to not buy everything I saw—as a fellow artist I do have a weakness for art. One of the tables that immediately caught my eye was that of modHERO with stylistic illustrations created by Queens-based artist Josh Siegel, aka Rogan Josh. Running the table was his supportive boyfriend as he himself was actually one of the people organizing the con, which goes to show how much support he gave back to the community he was a part of. You can view and even purchase prints of his amazing pieces at modhero.com.

There were many kinds of panels going on during the two-day event, some involving LGBTQ visibility in the media and others focusing on whether those in the community were being correctly portrayed. It was a show of our progress in how acceptance has grown over the years.

One of the panels that stuck out the most dealt with humor in comics. Led by a group of notable people in the field from Buzzfeed, Marvel and other self-publishing artists, the panel was faced with the question as to the need for humor in LGBTQ comics, and their answers covered a wide spectrum. Some said it was simply their writing style, whereas others drew a deeper connection. For many people, life can be hard, especially for those growing up in the LGBTQ community, and humor is something many of us as people use as a coping mechanism to deal with hardships. For many people, humor makes it easier to open up a dialogue about things that are hard to talk about. It is also a useful device whenever dealing with serious topics in a story to prevent it from becoming dry and to keep readers engaged, whether it is subtle or over the top. In some cases, humor can also bridge the gap and reach consumers outside of the targeted demographic.

During another walk around the exhibitor’s hall, I came across a table run by Dream Spinner Press, whose LGBTQ stories focus on positive endings. This development was amazing to hear about, because growing up, many, if not all, LGBT stories I heard were those of tragedies. The people running the table were amazing and excited and had recently opened up a sub-publication, Harmony Ink, the main mission of which is to get these stories into the hands of today’s youth to inspire them and fill them with hope. The categories span coming-of-age, romance, mystery, adult literature, fantasy and horror, and encompass a large audience so that readers of many tastes can partake in such feel-good stories. They also made sure I did not leave empty-handed. I took home nine books that I cannot wait to start reading. For more information, visit dsppublications.com and harmonyinkpress.com.

I would have to say that FlameCon 2 was a definite success. Amid a wide variety of fun events, die-hard fans were able to bring together an ever growing community, forming bonds and new friendships. I for one look forward to next year.