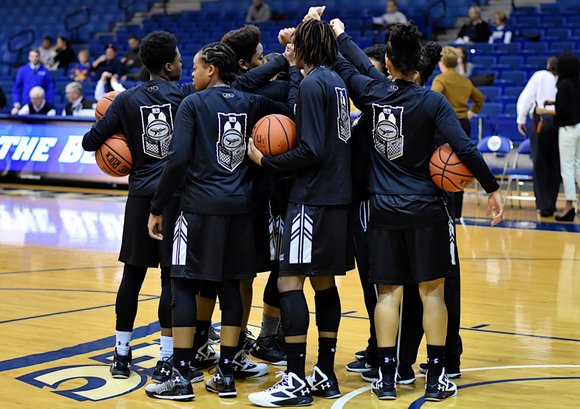 In her first year as head women’s basketball coach at Long Island University, Stephanie Oliver is creating a sense of kinship and possibility among her players. The Blackbirds’ 5-13 record does not reflect the upbeat mood on the team and the belief that winning is close at hand.

“The biggest thing was reaching out to all the players when I started and trying to make it a family before anything,” said Oliver, whose own extended family attended the press conference on May 15, 2015, announcing her as LIU’s new coach. “We’re all about family. That’s how I was brought up in the coaching world. That was huge for the girls to see.”

Oliver has an open door policy with her players. Initially dubious, the players now spend downtime in her office hanging out and doing homework. She believes that a close-knit environment moves onto the court because they know, win or lose, they all have each other’s backs.

“Turning around the program and establishing the culture that we have has been really positive for us, regardless of the wins and losses,” said Oliver. Except for a 20-point loss to St. Francis College, conference losses have all been in the single digits, which shows that they’re competing for 40 minutes. The next step is to finish down the stretch.

Oliver brings experience with turning programs around. As a player at Marist College, she saw the Red Foxes go from an average team to a dominant force in their conference. Prior to coming to LIU, she spent the past two seasons as the first assistant to coach Anthony Bozzella at Seton Hall University, watching that program go from single-digit wins to two consecutive years of postseason play.

“Shanovia is super athletic, which is great on both ends of the court. When she plays, it’s effortless,” said Oliver. “Paris can shoot from anywhere on the court and knock it down. She has a deceptive quickness. Shanice [a senior] is a hometown kid from Brooklyn. She’s super intense with a quick first step. She has a flair and she’s a great leader. I’m really going to miss her next year.”