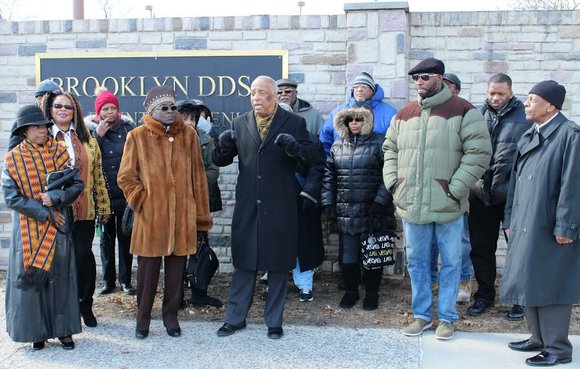 Assemblyman Charles Barron and several other community members organized a press conference in front of the Brooklyn Developmental Center in East New York to denounce the possibility of another shelter being placed in the neighborhood.

Barron said, “We are aware of the construction or rehabilitation that is currently taking place at the site. This community does not need anymore homeless shelters.”

Chants of “No more shelters!” could be heard from community leaders and members as they marched through the BDC facility urging workers to shut down production. Carrie Saunders, an occupational therapy assistant at the facility, joined in on the protest as well. She says that the individuals were moved to community group homes because the governor wanted to close the facility by Dec. 31, 2015.

Saunders, who has been working in the facility since November 1976, says it was a sad transition. “I was very sad because the reason why I came here is to work for the less fortunate,” she said.

According to the Coalition for the Homeless, there are little over 60,000 homeless people living in shelters in New York City. Approximately 58 percent of the residents are Black and 31 percent are Hispanic.

“The Black community, the Latino community, poor, struggling and working-class communities are going to rise up and say no to this. There’s a $150 billion budget. We need a youth center, a daycare center, some real affordable housing and perhaps a people’s supermarket in this area,” said Barron.

There has been no confirmation by the governor’s office that the new developments at 888 Fountain Ave. will reopen as a new homeless shelter, but the community is not believing it. “The governor can’t come in here and sneak in a homeless shelter without telling elected officials or the people in this community,” said Barron. “This land is owned by the people, and we’re saying to Governor Cuomo, you are not going to put us in homeless shelters and prisons.”

Growing tension in the community is a concern of District Leader Joy Simmons. “There are a lot of people in the shelter who are mentally ill or drug addicted, but you also have a lot of people who are working class and then you have some people in the shelter who just fall along hard times, so when you lump all those people together it is a recipe for disaster, said Simmons.

Like many others, Simmons would much rather see something beneficial to the neighborhood such as a CUNY campus or community center. Unlike Bed-Stuy and Brownsville, there is no prominent community center in East New York. Simmons hopes the governor and the state will take a chance to listen to what members of the community want. “We have ideas and plans we want to see those come to fruition,” she said.

Jamilla R. Bey has lived in East New York since she was a little girl. She is not pleased with the idea of a new shelter and worries about the safety of the community, especially for young kids.

This isn’t the first time that a shelter has popped up in the Brownsville-East New York area. Back in 2013, Barron and his team were on the street protesting the opening of a men’s shelter at 720 Livonia Ave.