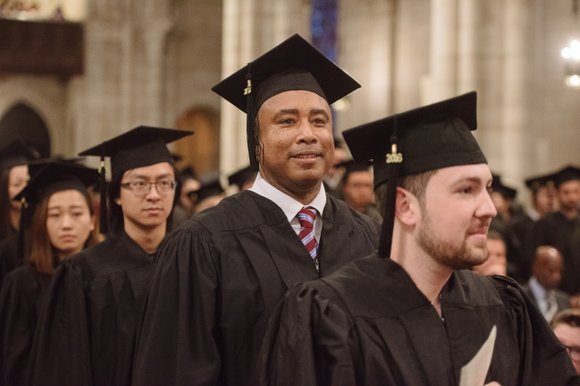 Former Yankee center fielder Bernie Williams lined up with more than 200 other graduating Manhattan School of Music students Friday afternoon, May 13, at Riverside Church to receive his Bachelor of Music diploma from the prestigious music conservatory.

“It was a very moving moment for me,” he told reporters after the ceremony. “Walking down the aisle I thought of all the hard work I’d put in, knowing that I did it, I earned this degree.”

Williams, 47, spent the past four years studying jazz guitar at the school, located around the corner from Riverside Church. He attended classes as a regular student with his much younger classmates, who didn’t know they were going to school with a baseball star.

“He’'s been so understated, and so much a part of the fabric of this school, going to school primarily with people who are 18 to 25-ish years old” said the school’s president, James Gandre. “He fit in so perfectly, not once allowing himself and his former career to get in the way.”

For Williams, one of the biggest challenges to earning the degree was the rigorous demands of the courses and the strict scheduling, something he wasn’t used to as a Yankee, where he had more spare time. But he has understood the importance of education and working hard since his childhood. His mother was a teacher for 40 years in the Puerto Rican public school system. Family rules included getting good grades before playing baseball or music.

“I think I've always been a student,” explained Williams. “I think I’ve approached this experience of music school and being in college as there’s always something new that you can learn every day.”

“There is a great correlation between the work ethic you need to have playing music and playing baseball,” he said. “The more prepared you are, the better you’re going to be. If you know how to read and write music, you know how to communicate with fellow musicians anywhere in the world. It’s the universal language.”

Williams is now actively involved in lobbying for more music in the schools. He’s heading to Capitol Hill in a couple of weeks to meet with members of Congress for the arts advocacy group Turnaround Arts. And he’ll perform at the White House on May25 for an audience that will include President Obama and the first lady.

Williams said he enjoyed his studies at the Manhattan School of Music so much, he’s now thinking of doing a master’s degree.

Watch the a video of Bernie Williams’ graduation ceremony

The Manhattan School of Music was founded as a settlement music school by Janet Daniels Schenck in 1918. Today the school is recognized for its 950 superbly talented undergraduate and graduate students who come from more than 50 countries and nearly all 50 states, a world-renowned artist-teacher faculty and innovative curricula. The school is dedicated to the personal, artistic and intellectual development of aspiring musicians, from its precollege students through those pursuing postgraduate studies.

Offering both classical and jazz training—and, beginning in fall 2016, a bachelor's degree program in musical theater—the Manhattan School of Music grants Bachelor of Music, Master of Music and Doctor of Musical Arts degrees, as well as the Professional Studies Certificate and the Artist Diploma. Additionally, true to the school’s origins as a music school for children, the precollege program continues to offer superior music instruction to young musicians between the ages of 5 and 18. The school also serves some 2,000 New York City schoolchildren through its Arts-in-Education Program and another 2,000 students through its critically acclaimed Distance Learning Program.