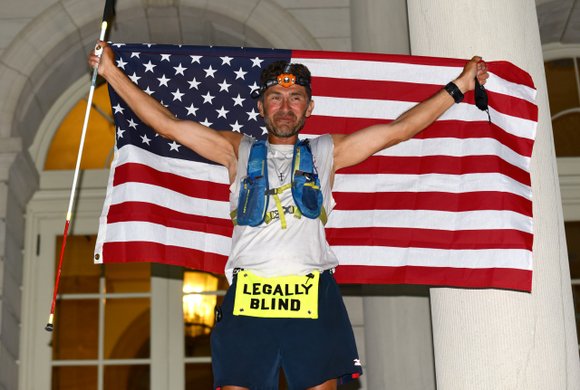 If you want to bring attention to a social cause, take a long scenic run, or a long-distance walk, across the United States of America. The latest adventurer to do so is Jason Romero.

Romero’s inspired run from California to New York, which he completed Monday, is to raise awareness about the issues facing Americans who are blind and the visually impaired.

It’s estimated that those who are blind and the visually impaired have a 70 percent unemployment rate, an obesity rate of 66 percent and a depression rate that doubles the rate of the general population.

Romero, 46, from Denver was diagnosed with retinitis pigmentosa, an incurable degenerative retinal disease, while in middle school. His condition is characterized by night blindness, a decreased visual acuity, which is the ability of the eyes to see details, and a consistent loss of peripheral vision. Despite his diagnosis, Romero played high school football and wrestled. He was captain of both teams, and participated in track. Additionally, Romero was in the National Honor Society and graduated with a 4.57 GPA.

The problems with his eyesight presented many obstacles for Romero with reading, test taking, socializing and participating in sports. His remarkable ability to adapt to his degenerative condition helped him to strongly compensate for his deficient eyesight. What he was losing in one sense was strengthening to the others.

A graduate of the University of San Diego, Romero earned a scholarship to the University of Colorado to study law. Inspired by his uncle, he discovered endurance sports and ran his first marathon while in law school. He realized that anything is possible.

To properly train for long-distance running, he would have his mother drive him to Boulder, then he would run back to Denver on the shoulder of the highway. He would run without water, food, sunscreen or a cell phone. “I was either very stupid or very courageous,” said Romero. “As I age, the former seems more appropriate.”

Romero is the first blind person to run across the U.S. Beginning his journey March 24 at the Santa Monica Pier, running about 50 miles per day, escorted by his mom and his support team, and joined by local runners from town to town, Romero was expected to arrive at City Hall to conclude his cross-country run Monday between 6 p.m. and 7p.m. But that was rush hour, and he didn’t arrive until around 8:30 p.m.

Unlike other days, that day Romero had to do close to 70 miles to finish.

“You have no idea how happy I was just to be at that point,” Romero said, explaining the final leg of his journey, crossing the George Washington Bridge and running to lower Manhattan, not concerned that it was one of the busiest times of the day.

“Along the way, I’ve run on the sides of roads, in desert conditions, in inclement weather, against tractor trailers and in heavy traffic conditions,” he said.

Romero could tell how the cultures differed from city to city. “Some people were nice enough to check on us, to make sure that we were alright,” he said. When leaving one restaurant, he was joined in prayer by a cashier and several customers.