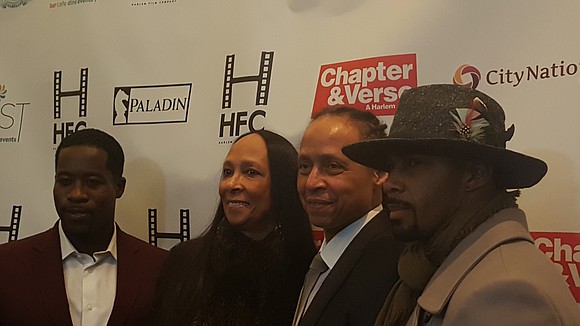 Harlem turned up and let loose at the red carpet premiere of “Chapter and Verse” at Mist Harlem. The gritty story is the first film to come from Harlem Film Company a new film and media company based in Harlem co-founded by Hollywood legend Cheryl Hill,

“Chapter and Verse” is directed by Jamal Joseph who shares a co-written by credit with Daniel Beaty and executive produced by Antoine Fuqua, and Sid, John and Bill Sheinberg.

The Harlem Film Company (HFC) is located in the heart of Harlem — sharing a Harlem zip code with the New York Amsterdam News and the famed Apollo.

After serving eight years in prison, reformed gang leader S. Lance Ingram (DANIEL BEATY) re-enters society and struggles to adapt to a changed Harlem. Living under the tough supervision of a parole officer in a halfway house, he is unable to find a job that will let him use the technological skills he gained in prison. Lance is forced to take a job delivering for a food pantry where he befriends Ms. Maddy (LORETTA DEVINE), a strong and spirited grandmother, and assumes responsibility for her 15-year-old grandson Ty, a promising student who is pulled into a dangerous street gang. When gang members decide to punish Ty for disobeying the “law of the streets,” Lance risks sacrificing his “second chance” at freedom so that Ty can have a “first chance” at a better life.

Director Jamal Joseph, is a filmmaker, acclaimed author, film professor, community leader, activist and a Black Panther who spent time in prison as a result of his involvement in the organization. One of the key factors to basing the Harlem Film Company (HFC) in Harlem itself was to be a part of the vitality and history of a people who understand the importance of creative resilience and how to make the sweetest lemonade from the rankest lemons.