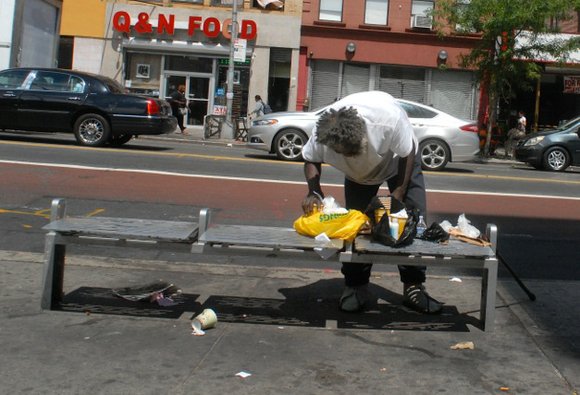 A new plan to fight homelessness being released by Mayor Bill de Blasio is getting criticism from homeless advocates about how the mayor is handling the widespread problem.

“The NYPD is among the premier policing and security organizations in the world, and having them work with Commissioner Steven Banks to manage security at our homeless shelters will ensure the best possible approach to providing safety for both shelter residents and the neighborhoods where are shelters are located,” said de Blasio.

Advocates say that more police in shelters means more harassment of the homeless. Last month, the New York Civil Liberties Union announced a settlement on behalf of three homeless men who were kicked awake and whose belongings were thrown into a trash compactor by police and sanitation workers in October 2016. In the settlement, the city will provide compensation for the personal items police illegally seized and discarded, which included Social Security cards, birth certificates and medication.

“It is only fair that the city has agreed to compensate our clients for destroying what few possessions they had,” said NYCLU Staff Attorney Jordan Wells. “Rather than having to pay out individual claims like those of our clients, the city should move away from targeting and criminalizing the homeless.”

The upcoming plan is the third one to deal with the homeless in just over a year. Critics say that like its predecessors, actual homeless people had no part in shaping the plan, and City Hall staff continues to refuse to meet with homeless activists to discuss it.

According to the Coalition for the Homeless, more than 62,500 people slept in city homeless shelters in December 2016, including 24,000 children.

“How are you developing a policy without going into the homeless community and getting feedback?” asked Jose Rodriguez, a member of Picture the Homeless. “They continue to throw wood on the fire—and money; $1.6 billion is being spent every year on shelter, but it’s being spent unwisely.”

“Siafa,” who is homeless, said that no one can speak for him about his experience and believes that people are profiting from the homeless.

“Shelters get paid to warehouse us in deplorable conditions,” he said. “Cops fill their quotas by harassing and arresting us. The Mayor’s new policies have just been more of the same. The general ignorant public might buy that, but unless he talks to homeless people, his new plans will achieve nothing.”