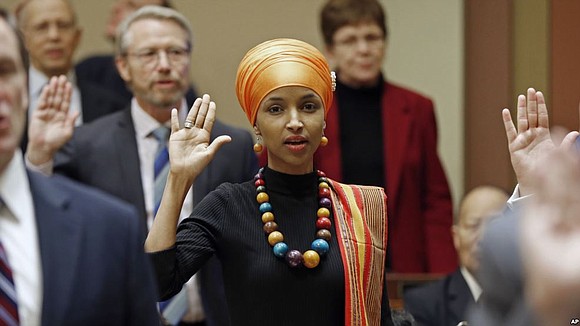 (GIN)—She’s an “intersectional feminist,” a mom, a refugee, an immigrant and a resident of Minneapolis. Besides that, Ilhan Omar is a history maker and the first Somali-American lawmaker in the United States.

Omar was sworn into the Minnesota House of Representatives Jan. 3, just days after an 8,500-mile journey that retraced her path from her war-torn homeland to neighboring Kenya to the Minnesota Capitol.

“To walk the same streets I walked as a kid, as a refugee, to think about the other kids who now are adults raising kids in Somalia, who are still living in a refugee camp … it’s hard not to believe there’s a bigger purpose,” said Omar.

Omar, 34, exceeded expectations when she captured the vote in this Midwestern state, which also happens to be the home of the largest Somali community outside Somalia, of approximately 40,000. Because she is a Muslim-American, some thought she would have an uphill fight during this time of “white backlash.”

Omar’s oath of office was taken on a special Quran in a ceremony last week at the Minnesota State Capitol Building.

“The ethos of America that can embrace a Somali-American, hijab-clad Muslim woman as their representative, I think that says something amazing about America,” said Asad Zaman, executive director of the Muslim American Society of Minnesota at her swearing in.

This week, Omar launches her “Coffee and Kulan,” which she described as “a monthly event bringing community members and local experts together to discuss issues that matter to us.”

“In Somali, Kulan means meeting,” she explained. “I hope we can use our collective knowledge to find solutions to make our state more prosperous and equitable for everyone.”

For the first meeting, the group will focus on environmental justice.

Born in 1982 in Somalia, Omar fled with her family to a refugee camp in Kenya after the civil war started. She immigrated to the U.S. in 1995.

She worked on several legislative and city council campaigns, becoming the director of policy and initiatives for the Women Organizing Women Network in Minnesota.

But Omar won more votes from people outside the Somali-American community, something Zaman described as “inclusive politics.”