‘Me the People,’ a hilarious musical comedy at The Triad 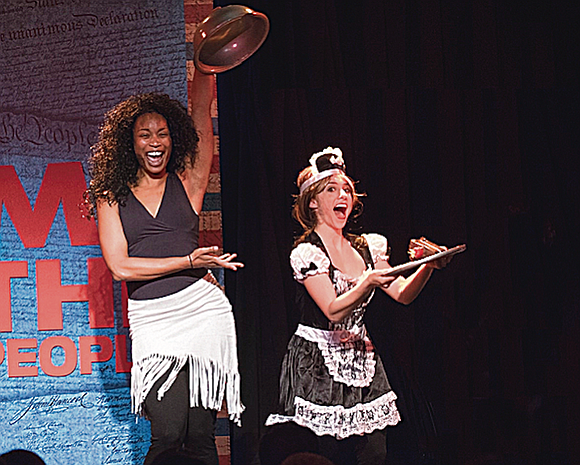 "Me The People" Broadwayworld.com

Are you concerned about the future of this country? Do you wonder how we got to where we are with our new inexperienced president? Do you wonder how a man with countless character flaws got into the White House and is still there? The hilarious answers to these and many other questions are waiting for you at The Triad Theater on West 72nd Street, where there is a side-splittingly funny musical, aptly entitled, “Me the People: The Trump America Musical.”

The musical will have you understanding what has been happening since the election and the placement of Donald Trump as president. The brave conceivers of this production are Jim Russek, Nanacy Holson and Jay Falzone. There are an incredibly hilarious book and lyrics by Holson, catchy musical direction and arrangements by James Higgins and spot-on funny direction and choreography by Falzone.

As you sit in the intimate nightclub setting of The Triad, which is on the second floor, you’ll find yourself in this brave new world of Trump’s America. This America is one that the Founding Fathers never intended. Trump’s America is one with travel-bans for Muslims, no voting rights for women, and women also don’t have a say about their bodies and abortion rights. This world is one in which Vice President Mike Pence has the answer to the “problem” of homosexuality. He can help them go straight. This America is one where Trump’s connection with the Russians is explained as going back to the 1970s and the audience is told, in a very humorous song, the chronicling of Trump’s connection with Russia and its leader.

There is an actor in a bird costume who comments about how much Trump tweets and how ridiculous and outrageous his tweets are. This musical pokes fun at all the players in Trump’s dysfunctional administration, including his daughter Ivanka, who is only about money and profit and will literally sell you the dress off her back for $10 million. The creative team also depicts her husband Jared Kushner as the “superhero” he is!

This musical takes Trump’s tweets and the headlines he generates and puts them front and center, including his attack on the media. Strangely, there’s a song that has four journalists confronting Trump on his treatment of the media and proclaiming that they will not be silenced. One by one they are each taken down. One Black journalist gets an envelope that states she is to be deported back to Africa, even though she and her parents were born and raised

in the United States.

As much as everyone laughed and how long they laughed, the sobering part of being in the audience was to realize that this story isn’t made-up, it is just a funny way of sharing words Trump has actually said. It’s a valid look at the state of chaos in the country since Trump took over. You also wonder about the future of the planet because he doesn’t believe in global warming.

Making sure to give the character of Hillary Clinton some stage time, the play features a song by Hillary that explains how she felt about everything that happened, and this song is unforgettable. It has an opportunity for the audience to participate, and believe me you will. You will proudly shoutout the words on cue from the cast onstage.