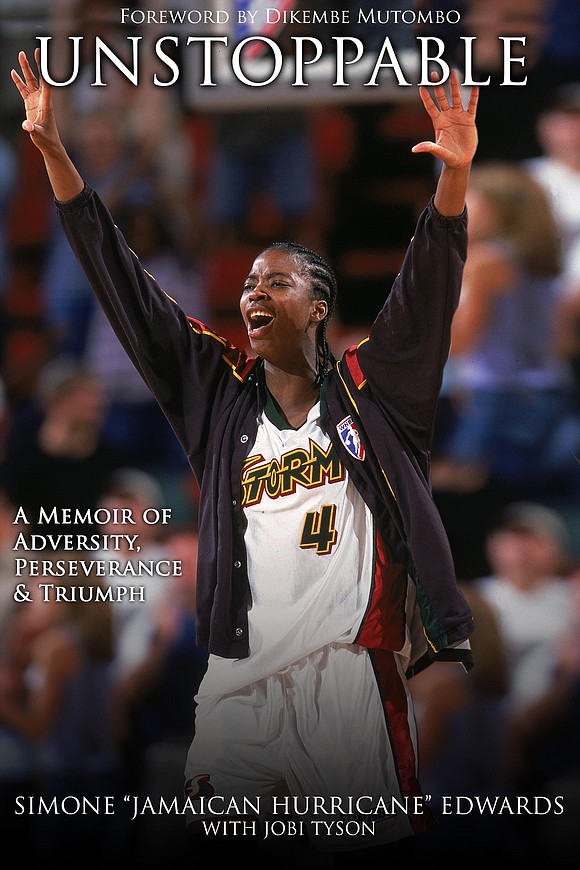 Over the past week, Simone Edwards made appearances as national representative for Caribbean American Heritage Month, coached a basketball team of women in their 60s competing in the National Senior Games and launched her autobiography, “Unstoppable: A Memoir of Adversity, Perseverance & Triumph.” Her busy schedule is a pleasant reminder that some of the things she’d dreamed of as a girl have materialized, thanks to a tireless work ethic and her belief in transcending her circumstances.

Edwards, 43, grew up in Kingston, Jamaica, in an area called “Angola” in August Town, hearing gunshots every night. She ran track and dreamed of getting an athletic scholarship to a U.S. university. After losing at a big track meet, she thought her dreams were over until she was discovered by basketball coaches on a recruiting trip and offered the opportunity to play college hoops in the U.S.

After an outstanding two years at Seminole State College, a two-year college in Oklahoma, Edwards entered University of Iowa. Because of two knee injuries, she didn’t have the outstanding Division I career she’d hoped to achieve. Undrafted in the WNBA’s inaugural season, she heard about a tryout camp with the New York Liberty.

“I gave it everything. I made sure I showed them I was exceptional. When I got the call from Carol Blazejowski (former vice president and general manager of the Liberty), it changed my life,” said Edwards, who spent the 1997 WNBA season as a developmental player with the Liberty. That helped launch her 10-year professional career overseas—playing in Israel, Italy, Hungary and Spain.

In 2000, she was signed by the Seattle Storm and remained with the team for six seasons, including winning a WNBA championship in 2004. Encouraged by fans, she launched her foundation, Simone4Children, sending school supplies back home to Jamaica.

She and co-author Jobi Tyson wrote the memoir over a two-year period, sharing stories about Edwards’ journey so people know where she’s coming from.

“One thing I want people to take away from the book is that your current circumstances don’t dictate your future,” said Edwards, who is increasingly popular as a motivational speaker. “There were parts of my life that were tough and I was struggling. I didn’t let it swallow me. Every time, I told myself it was temporary. I want people to understand whatever they’re going through, things can change. The book shows as I progress and persevere, everything is possible.”