Family and friends remember Shantel Davis, demand justice on anniversary of her death 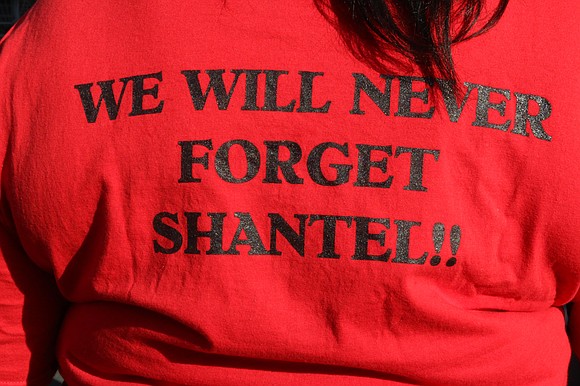 Family and supporters gathered in Flatbush, Brooklyn, as they commemorated the fifth anniversary of the June 14, 2012, shooting death of Shantel Davis by NYPD Officer Philip Atkins. The family say that there has been no justice since Atkins shot and killed Davis as “she sat trapped in the driver’s seat of a vehicle behind the air bag, which had just deployed.” Atkins, who is known for his use of excessive force by the Flatbush community, had previously been named in seven federal lawsuits. Davis was unarmed.

In the five years since the killing, the Davis family say that they have “heard nothing regarding either a departmental or criminal investigation.” Last month, Davis’ sister, Natasha Duncan, said that she sent a letter to Acting District Attorney Eric Gonzalez requesting he meet with her regarding the status of their investigation into her sister’s death before the five-year anniversary June 14. Despite of multiple attempts to follow up, she states that she has yet to receive a response from the Brooklyn DA’s Office.

At East 38th Street and Church Avenue, Brooklyn, Mt. Zion Church of God, last Wednesday family members of other New Yorkers killed by the police, elected officials and supporters stood with the Davis family as they remembered and celebrated her life and demanded that Gonzalez meet with the family, continuing to call for justice.

“We had a conversation with the family about a meeting, and one will be scheduled,” said Oren Yaniv, a representative from Gonzalez’s office, responding to a request for comment.