A community effort supports the street co-naming of Mrs. Ponsie B. Hillman Way 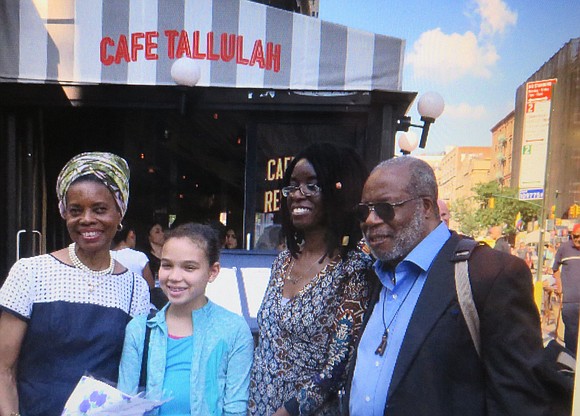 Sunday, Sept. 17, 2017, the community gathered at the northwest corner of West 71st Street and Columbus Avenue to unveil a street sign in honor of Ponsie B. Hillman. New York State Justice Robert R. Reed moderated the program inside the Hargrave Senior Center. Students from the National Dance Institute, members of the Celebration Team, danced to a theme, “Spanish Harlem.” Their enthusiasm was infectious. NDI is located at 219 W. 147 St. in Harlem, and their in-school program is free for children.

New York State Assembly Member Linda Rosenthal, New York State Sen. Brad Hoylman and NYC Council Member Helen Rosenthal hailed Hillman as a community leader and activist always seeking justice. Sonja Tennell, president of the North Manhattan Alumnae Delta Sigma Theta Sorority, Inc., and many of the Delta members were present. Jolean Manson, a Delta, made a trip from Pearland, Texas, to participate in the ceremony. Reed took the opportunity to introduce New York State Supreme Court judges and Civil Court judges who were in attendance. Reed said, “I’d like to boast a little. My wife Annette Gordon-Reed is here and is the first African-American to receive a Pulitzer Prize in History.”

Jerry Nadler sent remarks from the Congressional Record, Extension Remarks, paying tribute to Hillman. Elie Peltz, community liaison, read the remarks. Dr. Shirley H. Smith and Jolean Manson received letters from Bill de Blasio, mayor of New York, and Andrew M. Cuomo, governor of the State of New York. Addie Butler, Ed. D., presented final remarks, sharing a statement from Barack Obama and referring to Hillman: “We stand on the shoulders of giants who helped form a more perfect union. Our heritage is forged by men and women who organized, agitated and advocated for change, who fought to build a nation where no one is a second-class citizen and no one is denied basic rights.”

Ponsie Barclay Hillman, 1918-2008, was a pioneer in the civil rights and labor movement. She shaped her own destiny by standing up and building coalitions to fight wrongs in society.

Hillman was a member of many organizations in the community in the city. She was a life member of the NAACP, continuously working at the Mid-Manhattan and New York branches and on the state and national level.

In 1963, she was one of 53 teachers to assist in opening up the American Federation of Teachers’ Freedom Schools Project, in Prince Edward County, Va., during the summer.

Always a community activist, she also joined the Delta Sigma Theta, Inc. North Manhattan Alumnae Chapter of her sorority and the United Federation of Teachers. Hillman’s love for Harlem was evident by her work with the Deltas. She established the first Education Committee and served as its chair. Carolyn McBain, a member of the committee, shared how thorough and effective the committee was in interviewing and recommending young women for college scholarships. For many years, on Saturdays, Hillman mentored girls, taking them to view exhibits at the Liberty Science Center and other cultural events in New Jersey and New York City. Sorority sisters Ruby Cunningham and Jolean Manson met with Hillman to develop strategies of how they could inspire the community during an annual event, May Week.