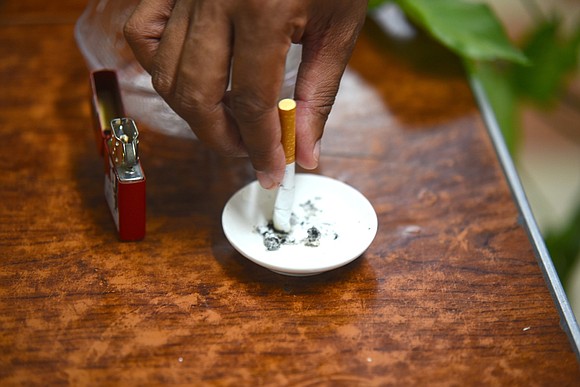 Nonsmokers and reformed smokers often rail against walking through clouds of nicotine as they walk by public spaces. Residents in multi-dwelling buildings might quietly grumble as they breath in relentless second-hand smoke from their puffing and dragging neighbors.

There is a theme here.

It is now illegal to smoke in any New York City public housing apartment or building or within 25 feet of the building.

Starting Monday, residents living in New York City Housing Authority buildings can no longer smoke in the buildings. NYCHA announced in February it would ban smoking in an effort to reduce the effects of secondhand smoke.

NYCHA families received notice of planned lease changes in January and a lease addendum in the spring. The new rule allows NYCHA staff and residents to report violations.

The member of the December 12th Movement community organization continued, “Having said that, NYCHA’s implementation of an open no smoking policy while hiding a policy of lying about lead paint and repairs will, in my view, greatly hinder tenant’s acceptance of anything positive coming out of NYCHA.”

The AmNews reached out to NYCHA to know specifically how resident will be punished, but the housing authority did not respond by press time.

NYCHA says it doesn’t want to evict tenants if they violate the smoking ban, but they will be punished. The ban includes cigarettes, cigars, pipes and hookahs.

“When we first learned of the new HUD rule requiring public housing to go smoke-free, we knew it was critical to engage our residents on the smoke-free conversation and what this will mean for their homes and public health overall in NYCHA communities,” said NYCHA Interim Chair and CEO Stanley Brezenoff.

The policy is in response to the United States Department of Housing and Urban Development rule requiring all public housing authorities to be smoke-free by July 30. The city initiated its Smoke-Free NYCHA program aimed at creating healthier homes for public housing residents and employees.

“The Health Department is proud to work with NYCHA on Smoke-Free NYCHA through engagement, education and connections to resources for residents who want to quit smoking,” said Health Commissioner Dr. Mary T. Bassett. “Through programs such as our Harlem Health Advocacy Partners, who are leading the Freedom from Smoking program for residents of Clinton Houses, Johnson Houses, King Towers, Lehman Village and Taft Houses, and our ongoing support of NYCHA’s Health Initiatives Unit, we are committed to the long-term work of helping NYCHA residents go smoke-free along with their buildings.”

“What about lead paint and mold?” demanded outraged activist Iman Essiet. “NYCHA could care less about that. Let’s be clear! This is a housing purge to get Black folks up out of their apartments. They could care less about our health. They—the federal government—know people are addicted to their smoke because they created the stress that caused us to become smokers in the first place, and these same people also own the tobacco companies from where the smoke comes from. This a bigger ploy to remove Black people out of city housing and off city and onto the streets, so that they can privatize NYCHA property and use it for more ethnic cleansing [gentrification] because they really think that the real estate market is going to save them from the fall of their capitalistic system.”

“This is one way of getting people out of their homes,” he said. “They have not come up with what are they going to do with all those smokers. There are no ideas and no agenda. They just enforced the law but never came up with a plan to help people.” Topping also said that smoking is an issue in public housing because cigarettes are so accessible. He said the city isn’t cracking down on the sale of untaxed and “loose” cigarettes, making it hard for residents to kick the habit.

“They have too many cigarettes in our neighborhood and there have been for decades,” he said. “They are forcing people to smoke because of the nicotine. This is something they should have done a long time ago.”

NYCHA residents aren’t the only ones being affected by smoking policies. By August, multiunit buildings in the city must also have a policy on smoking and disclose that policy to tenants and prospective tenants. The policy does not enforce smoke-free housing in private buildings, but allows people to make informed decisions to live in smoke-free building.

“How are they going to enforce this new law, and what tactics will they use?” asked a Bronx public housing resident using the name Anonymous Q, expressing the real concern being vocalized in the neighborhoods where NYCHA housing is plentiful. “Are they going to start kicking in doors saying that the dude in apartment F smelt cigarette smoke? They don’t care about our health. They just want this lucrative real estate back. And by the way ... I don't smoke ... but some of my peoples do.”