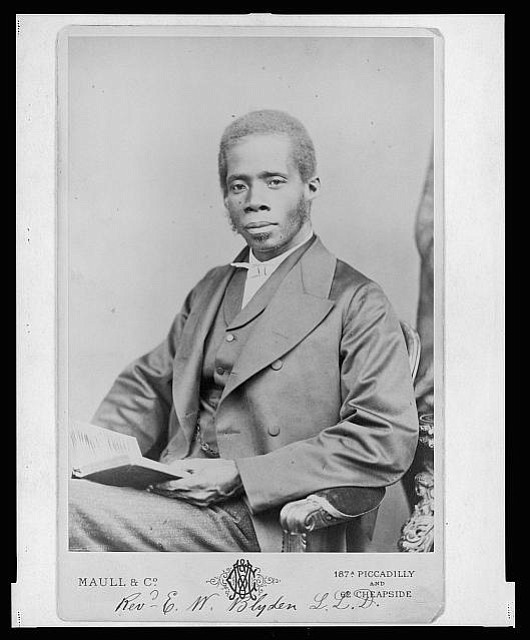 Whereas Marcus Mosiah Garvey is generally regarded to be the face of Pan-Africanism, Edward Wilmot Blyden is one of the forgotten figures whose shoulders he stood on.

“Blyden wanted to build an African empire that would be a shining star for Africans everywhere, not just on the Continent,” explained Dr. James Conyers, director of Afrikana Studies at Kean University. “He saw all Africans as one.”

Although Garvey often made reference to Blyden as being one of his integral inspirations to globally organize Africans, his name is hardly mentioned when homage is paid to pioneering Pan-Africans. Garvey himself suggested, “You who do not know anything of your ancestry will do well to read the works of Blyden, one of our historians and chroniclers, who has done so much to retrieve the lost prestige of the race!”

Blyden was born Aug. 3, 1832, on St. Thomas in the Virgin Islands, spending his formative years there. He migrated to the U.S. in May 1850 and was denied enrollment in Rutgers University’s theological program because of his dark complexion. The following year he relocated to Alkebulan (Africa), settling in Liberia.

“His views encompassed the entirety of African history and culture, in terms of his redemption,” Conyers said.

Blyden edited the Liberia Herald and wrote one of his first major works while there in 1856, “A Voice From Bleeding Africa.” Eventually Blyden became ambassador to Britain and France for Liberia, and then continued his journalistic journey in Nigeria and Sierra Leone for newspaper publications in both colonized countries.

The erudite liberator became a professor at Liberia College, remaining there until 1871, returning in 1880 to serve as president for four more years. Between his teaching duties, from 1864 to 1866, Blyden was also Liberia’s secretary of state and returned as minister of the Interior from 1880 to 1882.

After leaving Liberia College, he relocated to Freetown, Sierra Leone and edited West Africa’s first Pan-African journal, Negro. Blyden wrote regularly, notably for The Lagos Weekly Record, The Sierra Leone News, which he helped establish in 1884 “to serve the interest of West Africa ... and the race generally,” and The Freetown West African Reporter, which he also founded with the declared aim to “forge a bond of unity among English-speaking West Africans.”

Blyden was known more as an intellectual than as the typical grassroots freedom-fighter, and he wore many different hats. Along with being an educator, statesman and writer he also held positions of leadership in politics and diplomacy. Recognized as one of the greatest African minds of the 19th century, he was an ardent advocate of African primacy.