Les Payne, noted journalist and a founder of NABJ, passes at 76 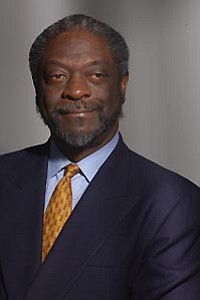 Leslie Payne was the consummate journalist, a reporter and editor of unimpeachable integrity, and he could regale you with story after story on the people he knew and covered during his remarkable career. The journalism may have ended in 2006 when he retired, but he was still working determinedly to complete his biography of Malcolm X. We will have to wait on the status of that project. Payne, 76, died suddenly Monday night at his home in Harlem.

It is hard for me to be objective about Les—and objectivity was one of his calling cards—as he lived up the street from me and we would see each other in the neighborhood on many occasions during our walks. Those occasions allowed us to talk politics, and few were as up to date on local, national and international affairs as he was.

Our last real extended conversation occurred in New Orleans at last year’s National Association of Black Journalists Conference. We spent time with Larry Goldbetter, president of the National Writers Union, and Les told him about the NABJ and his role as one of the founders. He also recalled for us the last time he was in New Orleans in 1993 when he was president of the organization. Later that evening I would spend time with his son, Jamal and several of his friends.

Last summer he enthralled my City College students with a spellbinding recollection of Malcolm X during one of our stops on a tour of Harlem not too far from his home and where Malcolm X worked at Jimmy’s Chicken Shack. From that discussion I learned that he was nearing completion of his research and writing on Malcolm that had consumed his time for more than a quarter century.

During one of the last visits to his home we discussed the works of H.L. Mencken; he had a shelf full of the writer’s books and was able to quote chapter and verse on the man’s satire and linguistic skills. And then there was his long elucidation on art—he was a devoted collector. I remember meeting him once at Swann Gallery and listening to his exchanges with the noted authority on African-American culture, Wyatt Day.

But my fondest memories of Les were the times I shared with him and Milton Allimadi on Gil Noble’s “Like It Is” show on WABC. No topic was alien to him and I often sat in awe of his insight and profundity. Often before we went on the air we shared our common beginnings in Alabama. He was born in Tuscaloosa July 12, 1941, and I was born in Birmingham, Nov. 1, 1938. “Two Alabama boys made it big in New York City,” he joshed. “At least one of us did,” I cracked. As veterans of the Vietnam War we also shared stories, though as a captain he once again outranked me.

These are my personal reflections of a journalist who spent nearly four decades at Newsday in a number of capacities, none more memorable or challenging than his days in South Africa or in the poppy fields of Turkey and on “the heroin trail” as a member of a team that earned the paper a Pulitzer Prize.

Winning prizes and awards were nothing new for Les, whether academically as a student at the University of Connecticut or behind a typewriter or word processor. In one of our last conversations we talked about his induction into the Hall of Fame of the Deadline Club, the New York Chapter of the Society of Professional Journalists. That plaque or trophy can take its place next to those he received as a member of the NABJ’s Hall of Fame, and the Aronson Life Time Career Achievement Award. I feel so blessed and privileged to follow in his footsteps receiving both these honors, which he may have influenced.

Any situation was a teachable moment for Les, and the real lucky ones in this process were his students at Columbia University Graduate School of Journalism where he was the inaugural professor for the David Leventhal Chair. Les was awarded honorary doctorate degrees from Medgar Evers College and Long Island University.

A call to his home was not answered, and I imagine his wife, Violet ,and his children, Tamara, Haile and Jamal, are fielding a number of calls, given Les’ countless colleagues, all of them devastated by his passing. “Les has been ever-present for my entire career as a generous colleague and valued role model, for me and many other journalists for decades,” said Jared McCallister, senior production editor, New York Daily News.

A wake for Payne is being held on Monday, March 26 at the Abyssinian Baptist Church in Harlem form 5 p.m. to 8 p.m. Funeral services will be held at the church on Tuesday, March 27 at 10 a.m. with burial following in the Long Island National Cemetery.