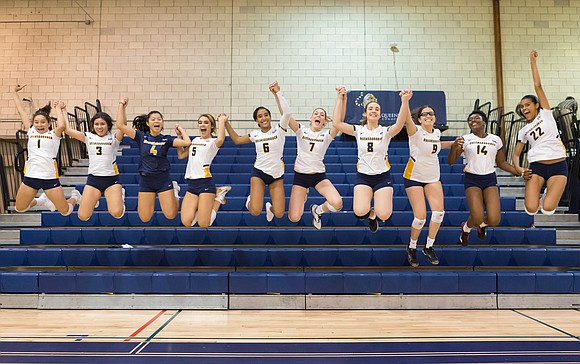 The Lady Tigers of Queensborough Community College after one of their recent champinships. Contributed

The next day, QCC took on Northern Essex CC and then Nassau CC. Victories made the Lady Tigers District G Champions and earned the team a return trip to the NJCAA Division III National Championship Tournament, which is being held Nov. 8 to Nov. 10 in Rochester, Minn. The team finished regular season play ranked eighth in the nation and is seeded eighth of 12 teams.

“It’s a great experience for the kids to go play on the national level,” said head coach Jason Demas, CUNYAC Coach of the Year. “Just the fact that we get on a plane to go play a game is a great experience. This is our third trip in a row to Nationals. Every year we keep trying to get better and we’ve been successful in doing so.”

Demas spends a lot of time recruiting, and the team attracts both local and non-local players. The standout is sophomore outside hitter Paola Beniquez, CUNYAC Player of the Year, a gifted artist from Puerto Rico, who might wait on art school if a Division I athletic scholarship comes through.

“We’ve really excelled in identifying kids who might not have gotten a scholarship to play in college. Creating a winning culture has brought kids in who otherwise would not have come to the school,” said Demas, in his ninth season at QCC, starting the position straight out of college. Before his arrival, QCC had never won the CUNYAC Championship. Now the team has seven titles.

“We’re a two-year school, so basically the team is different every year,” said Demas. “This year, we had six returners, which is rare. We’re constantly recruiting. Now that we’ve been so successful, sometimes the program recruits for itself. We have kids that contact us.”

He added, “Some of our kids will have a chance for [athletic] scholarship, especially this group for next year.” The six sophomores on the team have had interest from four-year schools—some from Division III and others Division II. As Demas said, “That says a lot about the program.”