As Brazil nears a Bolsonaro presidency, Black lives are under attack 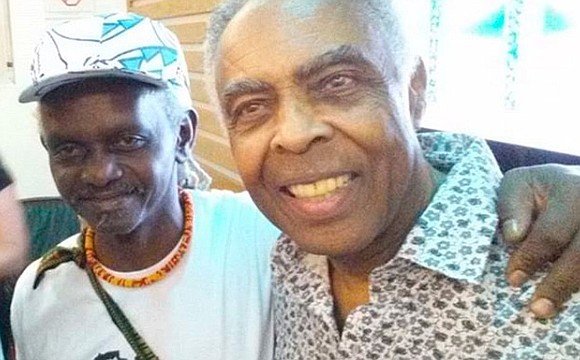 Gilberto Gil with Moa do Katendê, who was murdered by Brazilian racist Contributed

If you think we are living through the worst of times here in the United States (with someone named Trump serving as our president), take a moment to say a prayer for the people of Brazil.

The shocking possibility that a former army captain, Jair Bolsonaro, could by the end of this month become Brazil’s next president is terrifying people throughout the country.

Bolsonaro, the far right-wing candidate of the Partido Social Liberal/Social Liberty Party, makes no apologies for his racist, sexist, homophobic and torture-leaning tendencies. Bolsonaro is known to have ties with neo-Nazi movements. As the Brazilian activist and journalist Pedro Henrique Leal pointed out, “Among his many controversial statements, Bolsonaro is widely remembered for claiming that ‘the only reason he didn’t rape’ a congresswoman was ‘because she didn’t deserve it’—he later explained that she didn’t deserve it because ‘she was too ugly’; for saying that President Fernando Henrique Cardoso should be ‘shot in a public square’; for calling Black activists ‘animals’ that should ‘go back to the zoo’; for stating that homosexuality is due to ‘not enough beatings’; and for confessing that he ‘didn’t have to worry’ about any of his children dating afro-descendent women or being gay ‘because he gave them a proper education.’ To him, Haitian, African and Middle Eastern refugees in Brazil are ‘the scum of humanity’ and should be dealt with ‘by the army.’”

Bolsonaro’s extremist statements have not only been accepted by many Brazilians, some of his followers are beginning to act out on his calls for violence.

As the first round of presidential elections came to an end this past weekend, Bolsonaro just missed being declared the outright winner because he had not received the required 50 percent of votes cast. Having won 46 percent of the vote, Bolsonaro is set to face a second round of presidential elections Oct. 28 against Fernando Haddad, the candidate for the Partido dos Trabalhadores/Workers’ Party who won 29 percent of the vote.

After the election results were announced, Bolsonaro himself went on Facebook and claimed that the only reason he did not win in the first round was because the vote was rigged against him. And one of his followers in the state of Bahia, Brazil took his claims to heart.

A local barber by the name of Paulo Sérgio Ferreira de Santana overheard someone who did not support Bolsonaro in the same bar in which he was drinking. It was the famed Bahia artist and capoeirista Moa de Katendê. The 63-year-old Katendê supposedly got into a political argument with de Santana about Bolsonaro and his anti-Black stances. After the discussion ended, de Santana went to his home, grabbed a knife, returned to the bar and stabbed Katendê 12 times, brutally murdering him.

Katendê, whose given name was Romualdo Rosário da Costa, was famous as a local artist who had worked with both Caetano Veloso and Gilberto Gil, two of Brazil’s most famed musicians. Veloso, Gil and thousands of others have decried Katendê’s senseless murder and the tense political atmosphere that led to his death.

Black activists in Brazil have been doing what they can to organize against a Bolsonaro presidency that would work against the advances the community has made in recent years. Another Bahia-based Afro-Brazilian activist, Ludimilla Teixeira, was the creator of the Facebook page Women United Against Bolsonaro. This past Sept. 29, her Facebook page was able to organize thousands of women in 52 cities in Brazil and throughout the world to march against the Bolsonaro candidacy under the slogan #EleNão – #NotHim.

If Bolsonaro wins Brazil’s presidency Oct. 28, there are fears that the political atmosphere in the nation will be as volatile as it was during the military dictatorship (which ruled the country from 1964 to 1985). Left-leaning activists are already making plans to go into exile or begin to work clandestinely to protect themselves and their communities. Bolsonaro has said that he has fond memories of Brazil’s military dictatorship, in particular its intelligence agency, the DOI-CODI, which regularly interrogated and tortured political opponents. In his effort to restore what he deems the past glories of the Brazilian government, Bolsonaro says the military should be allowed to finish the job it started when it was a dictatorship.