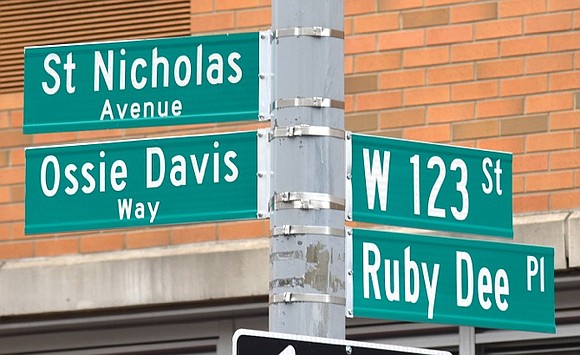 The Dwyer Cultural Center hosted the ceremonial unveiling of Ruby Dee Place and Ossie Davis Way on Saturday. The late couple is being honored for their groundbreaking programs within the arts.

“Three years ago, our executive director, Minerva Diaz, came to me with an idea about the street namings to honor my dear friends,” Frazier said. “And after a long and tedious process she got it done in late 2018.”

Beyond the Dwyer, Dee and Davis had a special relationship with Harlem. Dee’s parents moved to Harlem from Cleveland, Ohio when she was an infant. The couple helped develop the Community Film Workshop Council, Third World Cinema and the Institute of New Cinema Artists.

The couple’s children, Nora Day, Hasna Muhammad and Guy Davis, attended the street renaming ceremony. They said that even though Harlem is changing, Dee and Davis’ spirit remains in the community they cherished

“Coming here sometimes, you might not recognize the Harlem that mom and dad grew up in,” Muhammad said. “What we need to do is have links to the past that will remind us about who the people were that built this neighborhood. Having their names on street signs will be visual representation of that.”

Davis said if his parents saw the street sign they would have mixed feelings because Dee and Davis didn’t want to be celebrated.

“They would see what kind of good could come out of it,” he said. “It’s good to have your name up on a street sign, but you don’t want to get too comfortable because they can relocate you.”

The Dwyer opened its gallery to the public to view an exhibit dedicated to Dee and Davis with numerous storyboards displayed related to the work of the couple and Cliff Frazier. The public also participated in a community mosaic mural.

Raised in Harlem, Dee had an acting career that spanned over 70 years, appearing in nearly 60 films. She died at age 91 in 2014.